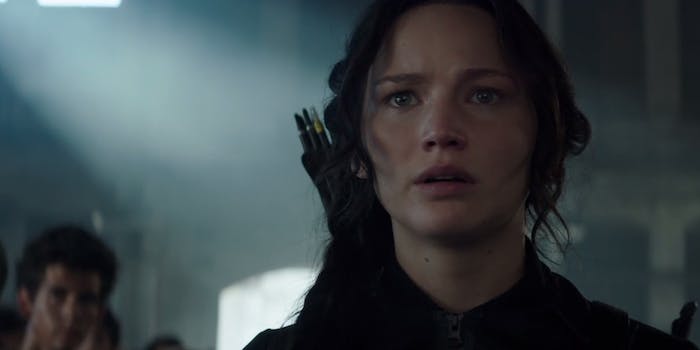 Here’s the latest trailer for ‘The Hunger Games: Mockingjay Part 1’

Up until now, all we’ve seen are a couple of propaganda videos.

In its ongoing mission to be the most miserable teen movie franchise of all time, The Hunger Games has released its first depressing (yet awesome) teaser trailer for Mockingjay Part 1.

Up until now, all we’ve seen are a couple of propaganda videos where a brainwashed Peeta Mellark stands silently by the side of the evil President Snow. This trailer shows the first proper footage from the movie, piling on the fictional misery (Katniss Everdeen’s encroaching PTSD) with the real-world sadness of seeing the late Philip Seymour Hoffman in one of his final roles.

Mockingjay Part 1 will see Panem descend from civil unrest into outright revolution, with Katniss as the somewhat unwilling figurehead of the rebellion. It picks up directly from where The Hunger Games: Catching Fire left off, so now’s the time to catch up if you haven’t watched the first two movies already.