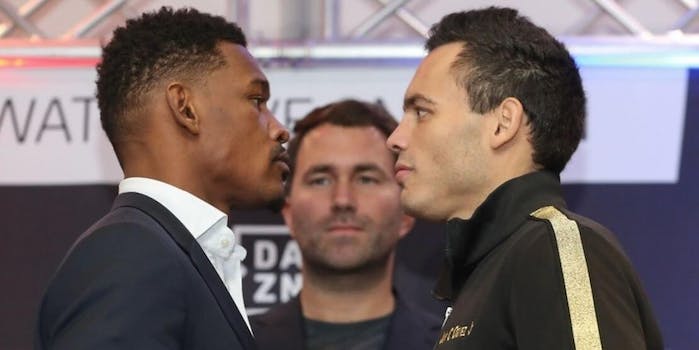 How to stream Daniel Jacobs vs. Julio Cesar Chavez Jr.

One is looking to make a splash in a new weight class. The other wants to keep his career afloat.

Daniel Jacobs never could crack the absolute top of the middleweight division. Julio Cesar Chavez Jr. never could escape the shadow of his legendary father. On Friday, the two will meet in the main event on a fight you can stream on DAZN, and they’ll both attempt to start fresh—Jacobs as a 168-pound super middleweight and Chavez who still believes he can live up to his inherited talent.

“This fight was a natural for me,” Matchroom Boxing promoter Eddie Hearn said at the prefight press conference. “When Jacobs lost the middleweight title to Canelo Alvarez, we felt it was time to move up to the super middleweight division. Julio Cesar Chavez Jr., we know about the popularity with Julio, his father, this seemed like a natural fight to make. If you’ve watched on social media, Julio’s preparation for this fight, it looks like he has been training seven to eight times a day for this fight. This is Julio’s big opportunity to come back, and for Daniel Jacobs, it’s his time to set up a shot at the world title in 2020.”

Here’s everything you need to know to watch Jacobs vs. Chavez on DAZN.

How to stream Daniel Jacobs vs. Julio Cesar Chavez Jr. without cable

The only legal way to watch Jacobs vs. Chavez in the U.S. is on DAZN. Since September 2018, the streaming service has shown some of the most important boxing matches in the sport. DAZN showcased Canelo Alvarez knocking out Sergey Kovalev, and it featured Andy Ruiz upsetting Anthony Joshua in June 2019 and then Joshua getting his revenge in December. Gennadiy Golovkin has fought twice on the service since June, and the exciting World Boxing Super Series tournament has been a mainstay. And don’t forget about KSI’s upset victory against Logan Paul in a YouTube boxing extravaganza last month.

DAZN costs $19.99 per month or $99.99 for the entire year, but for fight fans, it’s been a tremendous value. It streams more than 100 fight cards per year—including a large number of MMA cards with Bellator—and you can watch some of the best boxers in the world (like Alvarez, Joshua, and Golovkin) and some of the potential rising stars (like Vergil Ortiz Jr). DAZN says it’s doing its best to try to kill the longtime boxing PPV model, but another perk of a subscription is getting to watch fighters like Jacobs and Chavez on a regular basis that should get your blood pounding as the fists begin flying.

Jacobs vs. Chavez: Why it matters

This fight almost didn’t happen. Chavez blew off a drug test a couple months ago while preparing for this fight, and the Nevada State Athletic Commission suspended him from competing in the state—which was originally supposed to play host to this fight. So, the promoters moved the fight to Phoenix, and even though Nevada argued that Arizona couldn’t grant Chavez a license either—which would then force a cancellation of the fight—a judge on Wednesday granted an injunction that will allow Chavez to participate.

Chavez (51-3-1, 33 KOs) still thinks he can pull off the victory. Even though the fight was scheduled for 168 pounds, Chavez weighed in Thursday at nearly 173 pounds. The bout will go on, though, and Chavez will have to pay part of his purse to Jacobs. But in the leadup to the fight, Chavez—who has missed weight and failed drug tests multiple times earlier in his career—said his training was going well.

“The problems that I’ve had have been distractions, not focusing on what is mine, not boxing, being lazy, being undisciplined… I would go and grab a substance to avoid reality but I no longer have that conviction, I want to be the best fighter the world and for that I have to work three times harder,” Chavez Jr. told ESPN Deportes, via Boxing Scene. “[Trainer] Freddie Roach has been very hard on me and I like that because with my reputation, you can no longer tell if I am well today or if I am not well tomorrow. For two months I go to the gym and I do not know what I will find, with who I will be sparring or what training I will do. I just do whatever he says. I have to do it because he is getting me to my best.”

Chavez’s father is Julio Cesar Chavez, one of the greatest lightweight/junior welterweights in history and a national hero in Mexico. Julio Jr. is also popular in Mexico, but he hasn’t been the quality of fighter that his dad was. Julio Jr. hasn’t had a true quality victory since 2012, and Jacobs is not looking to give him one on Friday.

“This is a great opportunity for me,” Jacobs said. “I’m stepping up to the super middleweight division. I feel like this is the perfect weight for me.”