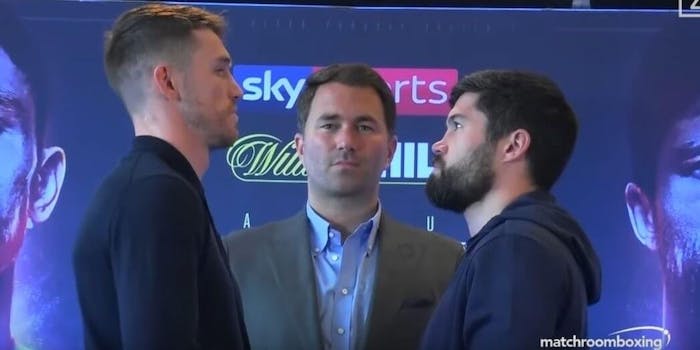 How to stream Callum Smith vs. John Ryder

The world's best super middleweight is in action.

Callum Smith is the best super middleweight in the world. He’s undefeated and holds one of the 168-pound titles, and against anybody else in the division, he’d most likely be the betting favorite. And sure, it’s hard to say what would happen if somebody like Canelo Alvarez made a pitstop in the division to take him on or if Gennadiy Golovkin moved up in weight to meet him. But for now, Smith—who will face interim titlist John Ryder on Saturday in a fight you can stream on DAZN—is the main man at super middleweight.

Ryder will try to upend that theory.

“He’s an absolute unit,” Ryder said, via Matchroom Boxing. “He’s a massive man mountain and he’s barely put a foot wrong. He’s had such a good career so far, but I believe that I can derail that. He’s beat good fighters, but I believe now is my time and timing is everything in boxing.”

To do so, Ryder would have to beat the best the division has to offer.

Here’s everything you need to know to watch Smith vs. Ryder.

How to stream Callum Smith vs. John Ryder without cable

The only legal way to watch Smith vs. Ryder in the U.S. is on DAZN. Since September 2018, the streaming service has shown some of the most important fights in boxing. DAZN showcased Canelo Alvarez knocking out Sergey Kovalev, and it featured Andy Ruiz upsetting Anthony Joshua for the heavyweight championship—their rematch will air on DAZN in December. Gennadiy Golovkin has fought twice on the service since June, and the exciting World Boxing Super Series tournament has been a mainstay. And don’t forget about KSI’s upset victory against Logan Paul in a YouTube boxing extravaganza earlier this month.

DAZN costs $19.99 per month or $99.99 for the entire year, but for fight fans, it’s been an awesome value. It streams more than 100 fight cards per year—including a large number of MMA cards with Bellator—and you can watch some of the best boxers in the world (like Alvarez, Joshua, and Golovkin) and some of the potential rising stars (like Devin Haney and Vergil Ortiz Jr). DAZN says it’s doing its best to try to kill the longtime boxing PPV model, but another perk of a subscription is getting to watch fighters like Smith on a regular basis that should get your blood pounding as the fists begin flying.

Smith vs. Ryder: Why it matters

Smith (26-0, 19 knockouts) is a popular fighter in his home country of England, but he’s still waiting for a matchup that would make him an international name. Knocking out George Groves and sending him into retirement 14 months ago was a good start and then stopping Hassan N’Dam in June while making the first defense of his world title was another solid step.

But beating Ryder, who is a 9-1 underdog, probably won’t help his cause much. Smith wants a fight vs. Alvarez, who just moved from 160 pounds to 175 pounds to knock out Kovalev, to help raise his profile.

“If he comes to 168, I believe I’m the No. 1 in that division, so he’ll have to come and beat me to take that place,” Smith said, via Sky Sports. “But I’m not going to waste my career waiting for a fight that might never happen. If it happens, it happens. If it doesn’t, there’s still plenty of other big fights.”

That’s true, though the super middleweight division doesn’t have the star power of either middleweight or light heavyweight. Daniel Jacobs was a former middleweight titlist who’s moved up to 168 pounds, and since both are promoted by Matchroom Boxing, that doesn’t seem like an incredibly difficult fight to put together. Caleb Plant and David Benavidez, both of whom hold world titles, would provide excellent fights for Smith, but—in my mind, at least—Smith would be the favorite to win both bouts (and neither Plant nor Benavidez are huge stars at the moment, anyway).

For now, Smith is content to put his attention on Ryder.

Though Ryder (28-4, 16 KOs) is six inches shorter than Smith, he said he’s more focused on his game plan and on getting on the inside vs. Smith so he can land power shots.

“I’m going to bring something that he’s probably seen in the amateurs, but as a pro, I don’t think he’s had the pleasure of,” Ryder said. “I’m a slick southpaw and I can punch hard with both hands. Height is his advantage, but I believe that being shorter is sometimes an advantage as well, getting under the shots and working the body and over to the head, so I believe that will play into my hands as well.”

Ryder has won four straight against solid competition, but in 2017, he lost a split decision to Rocky Fielding. When Smith fought Fielding in 2015, Smith knocked him out in the first round.