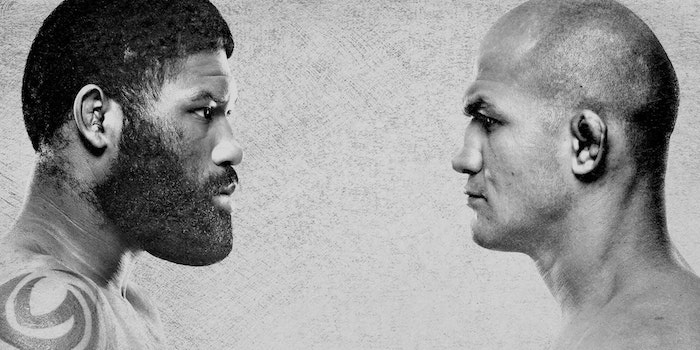 How to stream Junior dos Santos vs. Curtis Blaydes on UFC Fight Night

Is dos Santos too fragile for Blaydes?

Despite suffering countless punches, kicks, elbows, knees, and other physical abuses during his 14-year professional fighting career, Junior dos Santos (21-6) was very nearly done in by something far less dramatic. Three months ago, the former UFC heavyweight champion developed an infection near the end of training camp for a fight in Moscow. After dos Santos sought treatment, doctors quickly moved him to the ICU and told him he could have lost his leg, even his life, if he’d waited much longer. That he didn’t suffer a worse fate than he did was a blessing of timing. That he’s healthy enough to fight Curtis Blaydes (12-2-1) in a UFC match you can live stream on ESPN+ just 14 weeks after tapping at death’s door is some kind of medical miracle.

But this is the strange anatomical reality fighters live in. Their bodies are models of strength and inviolability, hardened by exercise and fueled by austerity, and they can recover at speeds incomprehensible to the average person. But the intensity of their training also leaves them as delicate as an egg. By the time a fighter has been through a 10-week fight camp and a weight cut, their body is tuned and stretched to such a heightened pitch it doesn’t take much to knock it out of whack; what seems like ideal physical equilibrium is, in some ways, the essence of fragility. A fighter will walk through 50 punches yet the smallest hint of a cough can signal catastrophe.

But in this case, a life-threatening infection could only derail dos Santos for so long, and his appearance in the cage Saturday night after such a dire prognosis will be a cause for celebration no matter the outcome.

Which would be a good thing for him to keep in mind when Blaydes starts coming for him. The former collegiate wrestling standout relies on his grappling to win fights, and dos Santos, a boxer by nature, has always looked most vulnerable against pressure fighters. But who knows? Maybe dos Santos’ recent dance with mortality has given him a new outlook, one that laughs at trifles like pressure, recognizes the transitory nature of physical existence, and finds more value in experiences than outcomes.

“It’s hard to explain how fragile we are,” the Brazilian recently told a reporter about the realizations he had while recovering from the infection that nearly cost him everything. This is remarkable. You hardly ever hear professional fighters admit their own fragility, especially heavyweights. But a brush with death is enough to make even a mixed martial artist philosophical.

Here’s everything you need to know to stream dos Santos vs. Blaydes.

How to watch dos Santos vs. Blaydes without cable

UFC Fight Night in Raleigh is being broadcast on ESPN+—the streaming service which, as of March 2019, signed a seven-year deal with the MMA organization to be the only home of UFC PPV telecasts and nearly two dozen UFC Fight Night shows each year.

ESPN+ is a fantastic way to stream all kinds of combat sports content. ESPN+ no longer has a free one-month trial, but the service only costs $4.99 per month or $49.99 for the entire year. Given how much content you receive, that’s a darn good deal (you’re also allowed to cancel at any time).