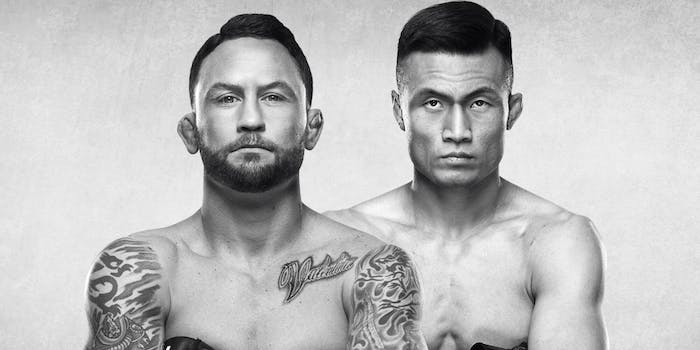 This wasn't supposed to be the original fight on Saturday. But we're glad that it is.

What can you say about a last-minute UFC fight between Frankie Edgar (23-7-1) and The Korean Zombie (15-1) to close out the year except that it’s a Christmas miracle? Earlier this month, when Zombie’s original opponent, Brian Ortega, injured his knee during training, fans long since resigned to the cruelty of the MMA gods felt a familiar misery creeping into their lives. But this time they’d barely even started despairing when it was announced that Edgar would be replacing Ortega. Just in time for the holiday season, an MMA curse had, for once, been turned into a blessing, like water into eggnog.

Of course this fight is no miracle for Brian Ortega, for whom the featherweight division is turning out to be an emotional minefield. It may be a torn ACL keeping him from Saturday’s main event, which you can live stream on ESPN+, but at this point some wonder more about the state of his mind than his body. One year after his humbling (and there could be no other word) loss to then-champion Max Holloway at UFC 231, how is Ortega’s mental state? How does one cope with being an undefeated championship prospect one minute and a punching bag the next? What does one do with that kind of sudden, overwhelming vulnerability—and the realization of one’s limits? And is Ortega’s absence from Saturday’s main event a lingering response to that loss?

The cruel truth about fighting is that every great gain requires an equally horrible loss. It’s the deal MMA fans make: We find delight in the misery of others if that misery is brought on by another’s artistry. So just as we were able to marvel at Holloway’s genius while he was dashing all of Ortega’s hopes, we can now celebrate the long-awaited fight between division legends Edgar and the Zombie even though it comes at the expense of Ortega’s psychological well-being—because life must go on!

And Zombie, aka Chan Sung Jung, and Edgar are all about life. Their fights run over with it. Life in all its variety, Since Zombie arrived in the UFC eight years ago, not one of his fights have gone to a decision, and each has ended in spectacular fashion: from unprecedented submissions and seven-second knockouts to mid-fight dislocated body parts and impossible, last-second, fall-from-ahead losses. Only the most action and the highest drama will do for Jung.

And while Edgar may not have Zombie’s flair for finishing or being finished, he remains, at 38 years old, the UFC’s poster boy for boundless energy, underdog stubbornness, and willful self-imperilment. After fighting much larger men for his entire 12-year UFC career, he just recently seemed to be getting wise: taking a fight 20 pounds down, in the 135-pound division, where his body always belonged. But then Ortega got injured and the opportunity to fight Zombie at 145 pounds presented itself, and Edgar, being Edgar, couldn’t pass it up. Once again caution had to be thrown to the wind, this time against a man who hasn’t known a moment of caution his entire fighting life. And that’s why this Christmas, we weep for Brian Ortega even as we count our blessings.

Here’s everything you need to know to stream Edgar vs. The Korean Zombie.

How to watch Edgar vs. “The Korean Zombie” without cable

UFC Fight Night 165 in South Korea is being broadcast on ESPN+—the streaming service which, as of March 2019, signed a seven-year deal with the MMA organization to be the only home of UFC PPV telecasts and nearly two dozen UFC Fight Night shows each year.

ESPN+ is a great way to stream all kinds of combat sports content. ESPN+ no longer has a free one-month trial, but the service only costs $4.99 per month or $49.99 for the entire year. Given how much content you receive, that’s a really good deal (you’re also allowed to cancel at any time).

Preliminary Card | 2am on ESPN+