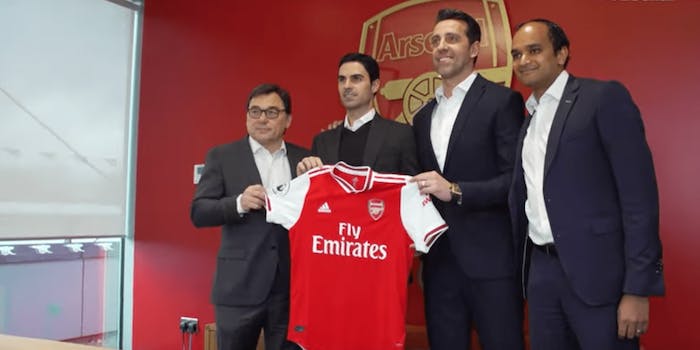 How to stream Arsenal vs. Bournemouth (and Mikel Arteta’s debut) live

Mikel Arteta makes his managerial debut for Arsenal on Boxing Day. For Arsenal fans, it's a reason to hope.

No matter how dreadful a 0-0 draw is, it’s still a point in the standings and it’s still considered a result. Granted, Arsenal’s scoreless draw with Everton this past Saturday was ugly, with the Gunners getting both of the total shots on goal for the match. But it’s a new era now for Arsenal, as former player Mikel Arteta—blossoming under Pep Guardiola’s tutelage at Manchester City—takes over as the team’s new manager.

His debut comes on Boxing Day at Arsenal makes a trip to the South Coast … where he, his team, and everyone else involved will hope for prettier football than they managed last time out.

Here’s everything you need to know to live stream Arsenal vs. Bournemouth, including what to watch for on the pitch.

Arsenal (recent form: DLWLD) has found wins hard to come by of late, and as a result, starts the holiday fixture season and Arteta’s tenure at the bottom half of the table. Of the three upcoming matches, this is the most winnable, given that Arsenal’s facing tests against Chelsea and Man United to close out the year and ring in the new year.

Plus, there seems to be a lift in spirits among the Arsenal faithful that wasn’t there when Freddie Ljungberg took over as interim manager for Unai Emery. Ljungberg was a beloved former player, but the idea that Pep’s coaching acumen might rub off on Arteta has fans thinking, if not immediate dividends, that things will be pointed in the right direction.

Bournemouth (recent form: LLLWL) has also had some recent struggles, with six losses and just one win in its last seven matches. Manager Eddie Howe is still highly regarded, but the run of bad luck has the Cherries 14th in the table. The recent win, however, came against Chelsea, so it’s not like Bournemouth’s forgotten how to play against the Premier League’s top teams.