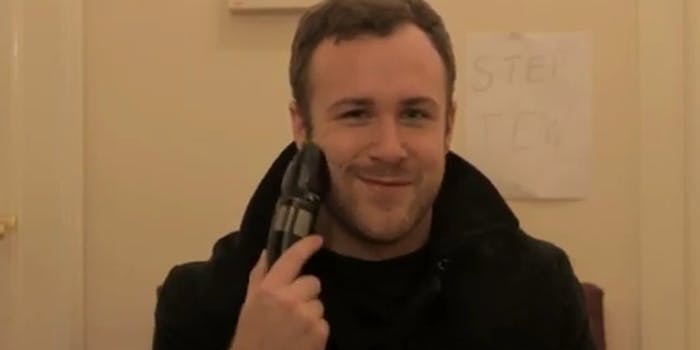 Hey girl, here's how to transform your man into the Ryan Gosling of your dreams.

As men, we won’t publicly admit it, but we want to look like Ryan Gosling. With those Photoshopped abs and piercing blue eyes, however, it’s not easy to achieve his superstar looks or his blogworthy status.

YouTube user joeythompson23, who resembles a beefier, red-state version of Gosling, offers tips to look like the actor. Posted on Sunday, the tutorial has collected more than 21,000 views and 1,000 likes.

Thompson said he didn’t believe that he looked like Gosling until a gas-station attendant pointed out the comparison. Being the polite, Southern gentleman that he is, Thompson gives viewers six pieces of advice to mirror Gosling’s dashing good looks.

First, Thompson suggests upgrading your wardrobe to something more chic, like you fell out of an Esquire spread. The second step he suggests is trimming and shaping your beard to something classier.

“You’re going to shave your face to a length that’s more GQ than it is grisly,” he suggests in his Southern accent.

In steps three and four, Thompson offers ways to contort your face to resemble Gosling’s sad puppy-like appearance. He said poke your jaw out “a tiny, little bit, but not too much.” And don’t overdo your grin. Rather, it should be thin and simple.

In step five, he suggests you should fix your hair like Gosling’s. Since us 99 percenters don’t have stylists, Thompson advises just wearing a hoodie.

And the final step, which Thompson suggests only to do if you’re bold enough, is to talk like him. Talking like Gosling is really just staring down at the ground while making little eye contact and mumbling your words. It’s Gosling’s dialect that’s tricky, we learned.

It only took six tips in becoming the most desirable actor in the world! Thank you, Joey, for producing the most useful YouTube video in existence.