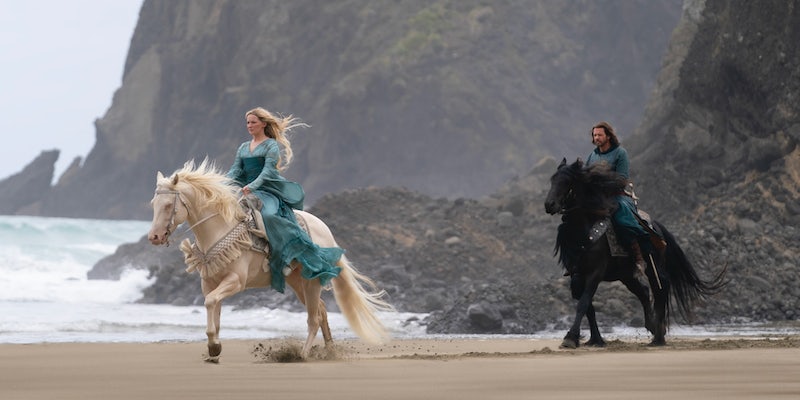 In the game of ‘House of the Dragon’ vs ‘The Rings of Power,’ viewers win

It’s a great time to be a fantasy fan right now.

If there are two remotely similar shows or movies out in the world, we can’t seem to help but compare them to one another. Who’s doing it better? Which one has the richer characters, the most compelling stories, and the juiciest mysteries? In an era when most information about ratings is opaque and framed to make those figures look as impressive as possible, which one has more people watching?

For House of the Dragon (HBO’s far-distant Game of Thrones prequel) and The Rings of Power (Prime Video’s even further-distant Lord of the Rings prequel), it’s essentially irresistible.

The pathway to these shows are intertwined with one another: Interest in adapting George R.R. Martin’s A Song of Ice and Fire began after LOTR’s success; TROP was greenlit by Amazon amid Jeff Bezos’ wish for his own Game of Thrones. (And unfortunately, both shows have faced racist complaints about their inclusive casts).

Indeed, many of those matchups are taking place in the online content arena. It’s a rivalry that the ROP cast and crew have tried to downplay, but their parent companies seemed to gently stoke it: When TROP debuted, HBO put the HOTD series premiere on YouTube for free.

“I don’t know why they always have to do that,” Martin told The Independent of pitting the shows together. “I hope both shows succeed. I’m competitive enough. I hope we succeed more. If they win six Emmys, and I hope they do, I hope we win seven. But nonetheless, it’s good for fantasy. I love fantasy. I love science fiction.”

I’m really enjoying both HOTD and TROP, but my relationship with those shows is very different. I’m actively covering HOTD, so I’m spending a lot of my time down in the weeds of the lore Martin wrote across ASOIAF and Fire & Blood, the kinds of deep dives that are wholly satisfying, but I also don’t want to spoil show viewers on what’s to come.

With my colleague Gavia Baker-Whitelaw taking the reins on TROP, I’m able to speculate freely on whether Hot Sauron is hiding in plain sight among the many handsome actors in the cast, poke fun at the inconsistency of Elven men’s hair lengths, and fall in love with so many of the characters, both old and new. Because I’m less familiar with the Appendices, I don’t know what’s coming on a granular level.

It’s a great time to be a fantasy fan right now. We have no idea how long these shows’ corporate overlords will be able to keep this going—or even how long the shows will want to run—but for now, we’re the ones who reap the benefits.