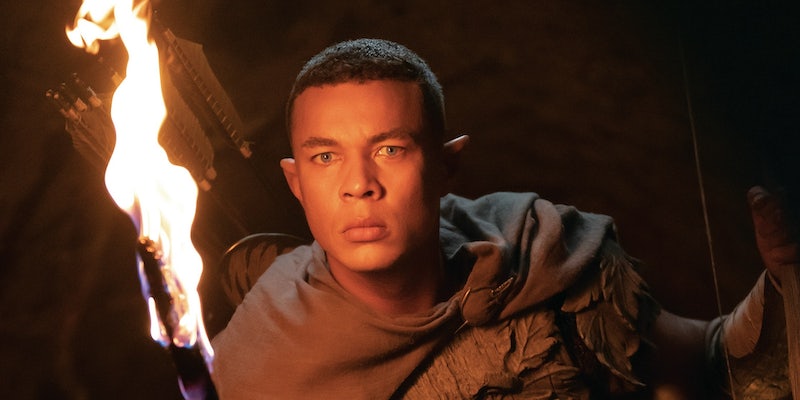 The show's creative team are standing up to racist trolls—and they're joined by the original LotR cast.

In the wake of similar responses to the diverse cast of shows like Obi-Wan Kenobi and Percy Jackson, it was sadly no surprise when The Rings of Power faced racist backlash from reactionary fans.

But over the past few years, the entertainment industry has learned how to tackle this kind of harassment campaign head-on. Rather than trying to ignore the backlash, the show’s cast and crew—not to mention some allies from the Lord of the Rings movie franchise—presented a united front on social media, making it clear that racist fans aren’t welcome.

“We, the cast of Rings of Power, stand together in absolute solidarity and against the relentless racism, threats, harassment, and abuse some of our castmates of color are being subjected to on a daily basis,” reads a statement posted by various members of the Rings of Power team. “We refuse to ignore it or tolerate it.”

The statement goes on to defend the multi-cultural nature of Tolkien’s universe, emphasizing that “fantasy has never been all white, Middle-earth is not all white.”

While the main cast of The Rings of Power is still majority-white, the show marks a significant departure from casting choices in Peter Jackson’s Lord of the Rings. Following in the footsteps of recent fantasy adaptations like The Witcher and The Wheel of Time, it casts actors of color as elves, humans, dwarves, and harfoots.

Puerto-Rican actor Ismael Cruz Córdova has received particular attention for his lead role as the elf Arondir, a character created for the show—and he’s been vocal about the importance of this role. Posting a photo of a giant Arondir billboard this week, he wrote:

“This billboard was blocks away from a hostel I once had to stay for a while in a room w bunk beds w many other ppl who were struggling w housing and money. We all had a beating heart and hopes of a better future. My heart was burning w an unshakable goal: To get to where we were told we couldn’t be. Here we are.”

Córdova also shared messages of support from the original Lord of the Rings cast, wearing merchandise with the slogan “You are all welcome here”—a reference to the inclusive intentions behind The Rings of Power.

The #YouAreAllWelcomeHere hashtag is quickly filling up with messages of support, including one from the official Star Wars account. Meanwhile, Amazon itself has taken action against review-bombing, suspending its on-platform reviews for the show.

For sci-fi/fantasy fans who witnessed similar controversies over other shows (most recently House of the Dragon), this whole situation is deeply dispiriting. Actors of color are facing harassment simply for existing onscreen, and it’s impossible to participate in the show’s fandom without tripping over racist trolls. Meanwhile, the polarizing nature of this conflict is flattening any attempts to critique the show.

It’s easy to take sides in this kind of scenario because the racist Tolkien purists are so clearly in the wrong. However, the show isn’t necessarily as progressive as its haters like to believe. The backlash is borne from oversensitive bigotry, but while TRoP is groundbreaking compared to previous Tolkien adaptations, its casting choices are deceptively conservative—and not immune from criticism.

Most of TRoP‘s prominent nonwhite characters were created for the show, suggesting a resistance toward racebending canonical figures like Galadriel and Elrond. And the first two episodes introduced some problematic racial dynamics around Arondir’s role in particular. The discussion around TRoP‘s casting choices shouldn’t be reduced to a binary feud between racist trolls and people defending the show as a bastion of inclusivity—but so far the trolls have been very successful in diverting the conversation.