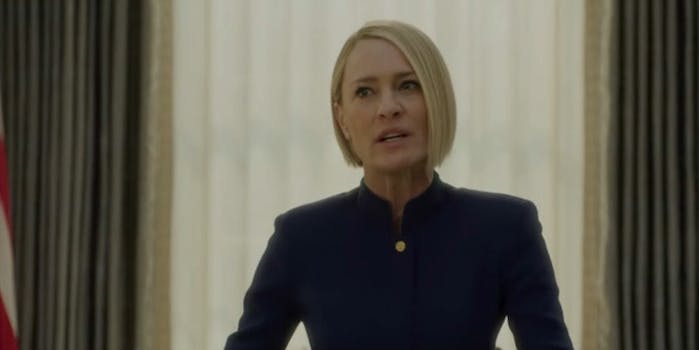 The final ‘House of Cards’ season 6 trailer is finally here

At the end of House of Cards season 5, we finally get a female president thanks to Claire Underwood—and a series of scandals, of course. But although the fictional United States broke the glass ceiling and made a progressive leap forward, the series itself was marred by real-life scandals that threatened the future of the show.

On July 9, Robin Wright, who plays Claire, broke her silence about Kevin Spacey.

“Kevin and I knew each other between action and cut and in between setups, where we would giggle,” she told Today. “I didn’t really —I didn’t know the man. I knew the incredible craftsman that he is.”

In the final moments of the last episode, Claire refuses to pardon her husband Frank, casts him out of the White House, and solemnly looks into the camera and says, “My turn.” These moments eerily foreshadowed the downfall of Spacey, who plays Frank, after sexual abuse allegations came to light in October.

“I don’t even know how to put it into words because you know one thing for so long and then all of a sudden it’s a completely different world you’re living in. There’s obviously a million emotions that I went through, that I processed during this whole thing. I don’t want to talk too much about it because it was heartbreaking in so many ways,” Michael Kelly, who plays White House enforcer Doug Stamper, told Variety on April 17 about moving the show in a new direction.

Many details about the future of House of Cards remain unclear. Here’s what we know about the final season so far, including some giant additions to the cast.

On July 4, the second promo for the new season hit the web. “Happy Independence Day… to me,” Claire says in the 12-second clip.

On Dec. 4, the show confirmed that it would continue onward without Spacey, and with Wright in the lead role. It will cap season 6 at eight episodes. On Jan. 23, it was revealed that the combined total of lost investments from firing Spacey, scrapping his Gore Vidal biopic, and parting ways with comic Louis C.K. cost Netflix $39 million, according to Bloomberg.

At the end of October, Netflix postponed production of season 6 indefinitely in light of recent sexual abuse allegations made against Spacey and cut ties with the actor altogether. In a joint statement, Media Rights Capital and Netflix said they will “review the current situation and address any concerns of cast and crew.”

The announcement came shortly after Netflix confirmed the season would be the series’ last.

“Media Rights Capital and Netflix are deeply troubled by last night’s news concerning Kevin Spacey,” Netflix said. “In response to last night’s revelations, executives from both of our companies arrived in Baltimore this afternoon to meet with our cast and crew to ensure that they continue to feel safe and supported. As previously scheduled, Kevin Spacey is not working on set at this time.”

Production on the final season of House of Cards is suspended until further notice.

The decision came in the wake of an interview published by BuzzFeed where Star Trek: Discovery actor Anthony Rapp alleged that Spacey made an unwanted sexual advance on Rapp in 1986 when he was just 14 years old.

Showrunners also considered abandoning the series altogether and are exploring pitches for a spin-off show, according to Digital Spy.

Eric Roth, an ex-House of Cards writer, pitched a show where Doug Stamper—played by Michael Kelly—becomes the focus and observes his work on new political crises.

They are also interested in focusing on the Washington, D.C., media which has worked to bring down the Underwoods, with Constance Zimmer and Boris McGiver in mind to play Washington Herald journalists Janine Skorsky and Tom Hammerschmidt.

In either case, on Jan. 22 the Baltimore Sun reported that production would resume filming.

Spacey will not return in season 6. It won’t be that difficult to write off Frank Underwood in the new season, as season 5’s finale made it clear that Claire has no intention of pardoning him or allowing him back in the White House, anyway.

Wright is slated to return as Claire and take her position as president of the United States. On Jan. 31, Diane Lane and Greg Kinnear were confirmed as additions, according to the Hollywood Reporter. Both are Oscar nominees, which bulks up the chops on board this time out.

Michael Kelly will return as Doug Stamper, the White House Chief of Staff. Fans suspect Neve Campbell could be back as LeAnn Harvey, whose car was run off the road in season 5—but they never found the body.

House of Cards season 6 will be comprised of eight episodes, mostly because of production costs, Vulture reports.

Unsurprisingly, co-executive producer Frank Pugliese told TV Line that Claire’s presidency will form a major arc throughout the season. She will also break the fourth wall and form a relationship with the audience, just like her husband did during his presidency—but in a different way.

“I don’t think she’s going to do it the way Frank did it,” he said. “How she does it could be really exciting. Claire’s needs from the audience are unique to her. We want Francis and Claire to be equal but different.”

The first two episodes of the season had already been filmed prior to halting production. They have been scrapped. So were the “five or six” scripts lined up next. In fact, the whole series may have been scrapped, were it not for an outpouring of support from Twitter, Vulture reports.

But now the writers have settled on a new direction for the show, and it’s all systems go.

A season 6 teaser trailer confirms that Frank Underwood is dead, but Netflix has been pretty quiet about how he died. However, early reviews allude that Underwood might have been murdered.

The first teaser of House of Cards season 6 premiered during the 2018 Oscars, and it gives us our first look at the new commander-in-chief. Claire Underwood promises us she “just getting started.”

In October, an official season 6 trailer was released.