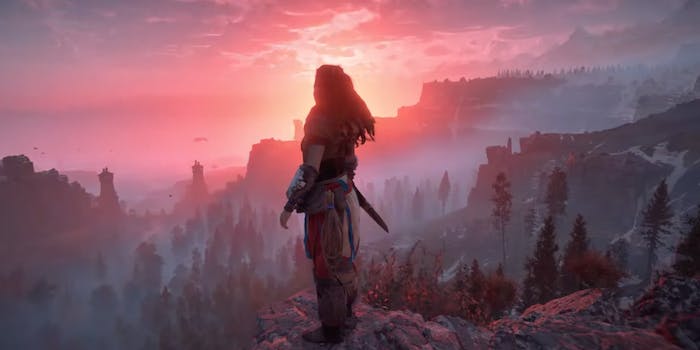 Everything we know so far about ‘Horizon Zero Dawn 2’

Thus far, we know very little about the upcoming game, but that isn't lessening our excitement.

We’ve managed to survive 2020. By the time summer hits, we’ll only have a few more months to wait until the PlayStation 5 arrives.

All the news about PlayStation’s next generation of console has people speculating about which games will accompany its release. While chances are very good that we won’t see the sequel to Horizon Zero Dawn in November, fans of the game are hoping some news will come with the new console. Thus far, we know very little about the upcoming game, but that isn’t lessening our excitement.

Guerrilla Games and Sony have been pretty tight-lipped about a potential Horizon Zero Dawn sequel. While we don’t technically have confirmation that the game is even in development, a series of leaks combined with the popularity of the first game and the impending release of the PS5 indicate that a sequel is definitely on the way.

Unfortunately, with all this fuzzy information, we don’t know the game’s release date for certain. A good guess would place the sequel’s release sometime in 2021 at the earliest, but considering the first game took almost seven years to develop, we might have a long wait ahead of us.

Chances are very good that Horizon Zero Dawn 2 will be a PlayStation exclusive. The first game was, after all, one of the platform’s best-selling games with more than 10 million copies sold worldwide. Sony is very likely to cling to this gem, making chances of an Xbox One or Xbox Series X version extremely unlikely.

A big indicator of the second game’s eventual release came from Guerrilla Games several weeks back. In a posted and promptly removed tweet, the company shared a listing for a job as a senior AI programmer.

The original tweet, which has since been replaced by one with a tweaked hashtag, indicated that the next Horizon game will likely be a PS5 exclusive. The new tweet carefully removed the PS5 hashtag and replaced it with a vanilla #ps.

Due to Horizon Zero Dawn‘s popularity, people began talking about a potential sequel pretty much the second they completed the game. That means the web is awash with rumors, leaks, and speculation.

These days, it seems like nothing can make it to release without something being leaked. The threat of leaked plot lines for games, television series, and movies has been a constant concern over the last few years.

Nothing so important as the storyline for Horizon Zero Dawn 2 has been spoiled, thankfully, but a huge PS5-related leak recently hit 4chan. In it, a tiny nugget of information hints that the new Horizon game is at least in development. Buried among several other anticipated games was a small note about the Horizon sequel.

To top off all the other rumor fuel, Guerilla Games seemed to confirm that the game was in the works in a recent job listing. The listing, which is for a “Technical Vegetation Artist,” specifically references Horizon Zero Dawn.

“Within Guerrilla, we have four teams dedicated to creating the stunning environments of Horizon,” the intro to the listing reads. “One team focuses on the creation of lush and stunning vegetation. We build these 3D models from scratch, so our world dressing teams can deliver our immersive world with industry-benchmark graphics.”

None of these things, individually, tell us much about the upcoming game. Combined, however, they begin to paint a picture about when we might be able to expect Horizon Zero Dawn‘s sequel, and what the game might include. We won’t speculate further, but it’s safe to say that it’s in the pipeline—we’ll be sure to update this post as we learn more.