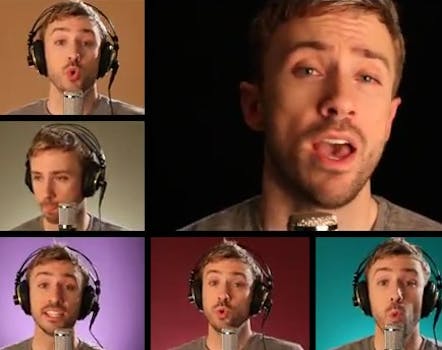 Solo artists shine in music of many voices.

That centuries-old form of choir singing known as a capella has been enjoying a renaissance on YouTube.

Digital tools allow a solitary vocalist, with careful editing, to sing all the roles a full-fledged a capella group otherwise would. Case in point, a cappella musician and producer Peter Hollen.

Hollen held an informal a cappella contest on the video-sharing site over the last month and also taught interested parties how to sing Gavin DeGraw’s “Not Over You” a cappella style.

The winning group or musician will earn Hollen as a producer, editor, mixer, master, and distributor of one a capella song, as well as promoter.

Roughly 50 musicians, or groups, submitted entries, some substantially better than others.

“It’s been really really tough for me to pick a winner,” said Hollen in a vlog announcing the winners uploaded early May 17. “There were so many great entries,” added Hollen. “I know it takes hours to do one of these, and I hope you had a lot of fun — it looked like it!”

Oakland’s School for the Arts a cappella group Vocal Rush—11 students between the ages of 15 – 18—was declared the winner. Hollen praised their “solo delivery, the subtleties you added to the arrangement, and overall quality” of their rendition, despite “sub par” video and audio quality.

Besides a cappella, other YouTube musicians have gotten quite handy in duplicating their vocals, such as Kurt Schneider and Sam Tsui, in their “Summer Medley 2011.”