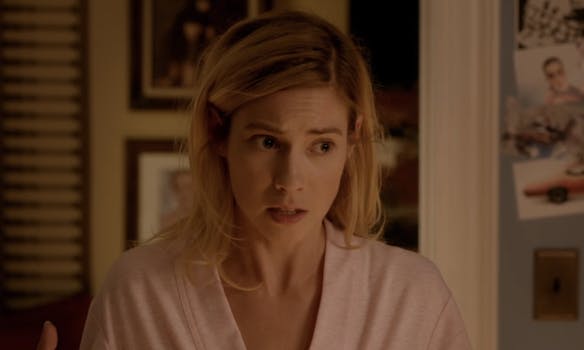 Should you be watching VH1’s ‘Hindsight?’

Do people not use AOL anymore?

VH1’s new time travel romcom Hindsight premiered last night and transported viewers back to 1995—a time before iPhones, Gmail, and Wi-Fi. Besides being a love-letter to all things ’90s, the series is coyly aware of the technology we’ve adapted as integral to daily life as well as the once-loved tech we’ve left behind.

The series stars Laura Ramsey as Becca, a bride-to-be who gets pre-wedding jitters on the eve of her second wedding. Becca’s been married before, to a man who she thought truly was the love of her life, and she is terrified that she’ll get things all wrong, again.

After speaking to a “magical black man” (VH1 isn’t letting this cliché die) at a newsstand who advises Becca in lofty verbiage not to chase her future nor to seek the past, and following a very shaky elevator ride, Becca awakes on the morning of her (first) wedding. The year is 1995. And, in spite of the unfortunate cliché in the preceding scene, the series gets back on track and is downright funny.

The best jokes are the moments that point to our alarming attachment to tech. Upon entering her parents’ kitchen, and before realizing she’s been transported 20 years into the past, Becca squeals with anxiety, “Where’s the Keurig? Where’s the Keurig?”

A typical moment of I-can’t-live-without-this-tech panic evolves when she encounters extinct technology in her brother’s bedroom: “VHS, a Discman? OK, this is going to sound crazy, but I’m having a very vivid dream that it’s 1995 and I’m marrying Sean today.”

Much of the rest of the pilot is devoted to typical romcom moments of dramatic decision, tender reunion, and pseudo-philosophical, existential musings. Becca reconnects with her former estranged bestie Lolly (Sarah Goldberg), and the two exchange an easy, warm chemistry that feels like slipping into a favorite old sweatshirt.

Though highly watchable, it would be easy to dismiss Hindsight as mostly fluff on premise alone. What makes the show so likable, however, is that it branches out from the flat conflicts of romantic love and delves into the intricacies of friendships we treasure and the things we come to expect will always be there.

In a pivotal scene Becca recounts a hasty list of how things will change in the future and scoffs that she could not get in touch with Lolly in the future because “the only email I had for you was AOL.” “That’s awful,” replies Lolly. “All of it sounds awful. Do people not use AOL anymore?” Becca breaks it to her softly that AOL has “become somewhat unfashionable,” and Lolly is crestfallen.

“But I really love AOL.”

It’s a light-hearted joke, playing on the absurdity of how very attached we can become to something as trivial as a Web provider. But Goldberg’s excellent performance is a testament to how much we love the people and things we love while we love them—and how heartbreaking the moments are when we realize we can’t hang on to them forever.

The series is part of VH1’s new foray into scripted programming, which is in itself a throwback to yesteryear amidst a sea of the network’s contemporary reality and celeb-based content. In this way, the show avoids being a retread and feels a lot more like a cozy trip to an old haunt. After hefty doses of reality TV divas and drama, Hindsight is welcome, easy watching, with a healthy helping of heart.