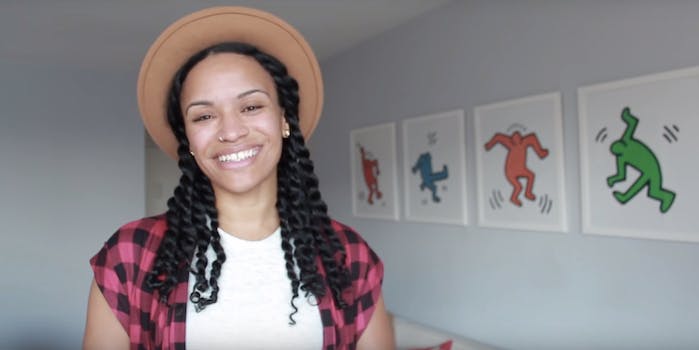 Fran has helped developed a space for black beauty creators to thrive.

Long before Hey Fran Hey was even a glimmer in Francheska Medina’s eye, the NYC native had only one goal: to walk again. Post-college, Fran suddenly became ill as recurring kidney infections led to kidney stones, a blocked bladder, and such pain that she was unable to move from her bed for eight months. It was in these months that Fran began researching natural living. In three months, she had cured herself, crediting juicing for extracting all the toxins from her body.

In 2012, Fran founded her YouTube channel and lifestyle blog, Hey Fran Hey, with the mission of sharing her natural hair, beauty, fitness, and health tips with viewers around the world. Fran became one of the first creators to champion the natural hair movement, and since then, has grown her channel into an all-encompassing lifestyle guidebook. Her video topics are diverse, covering oil cleansing and skincare, her travel adventures, mental health, fashion advice, and so much more.

Her lifestyle is a developed art. Every day, she drinks at least 3 liters of water, sets daily intentions during her morning meditation, eats an enviable meal every three hours, works out around New York City, and continues her research on natural, healthy living. Her videos are an extension of her life, and they authentically and honestly provide guidance on living without “a number.”

“I don’t believe in setting numbers because it can create a slight obsession,” Fran stated in a past interview with Simone. “I tell people get rid of your scales. I get naked too. Getting on a scale does not say anything. There was a girl recently at the park running way faster than me and she was much bigger than I am. It’s not about the number; it’s about your endurance and ability. All body shapes are awesome. Just focus on being healthy and everything else will come together.”

Fans are equally obsessed with Fran’s words of wisdom, sharing their gratitude and questions with her constantly on Twitter:

I felt @HeyFranHey's energy through my car saying, "calm down and keep going – it'll happen because it's for you." I had to holler in my car

@HeyFranHey I've been using your wellness tip for YEARS gets me through every cold and sick season. I RARELY use cough meds.🙌🏿

In the oversaturated ecosystem of YouTube beauty gurus, Fran stands out for not only what she says, but for the community she says it for. Unlike so many other creators, Fran is mindful of prices and gives advice on products and DIY projects that won’t require viewers to start working overtime. As for her community, Fran has helped developed a space for black beauty creators to thrive. Her tutorials answer basic questions for curly hair and celebrate the black female body with tutorials and style lookbooks celebrating this often overlooked and underserved community on YouTube.

So cheers to you Fran. Thank you for inviting us all into your life and making us a little stronger (and more loving of kale) along the way.