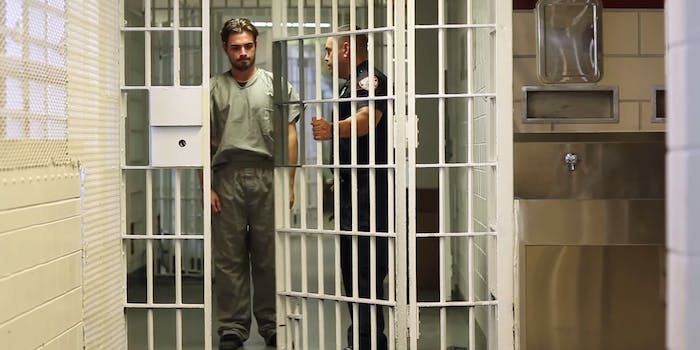 The best fun you'll actually have is working out just who made it.

As distractions go, you could do worse than Help Yourself—a webseries starring Mike Ryan; a disconcertingly Scott Disick-looking character powdered with a touch of Luke Perry. Set mainly within a prison work release program, the five available episodes of this comedy trade in the tired, expected tropes of the jail yard but also fling out enough skewed humor to make it well worth a watch.

But series aside, the best fun you’ll actually have concerning Help Yourself is figuring out just who made it. Its YouTube channel, nine7three Productions, doesn’t have any other videos, its website hasn’t even been updated to include the show’s episodes, and there are no end credits to indicate a writer, creator, or director.

Even the series’ star, the eminently ungoogleable Ryan, in a decidedly non-Disick move, has a private Instagram account.

It’s a mystery that is eventually unravelled via email, where it is revealed that the series is a creation of Mike and Justin Ryan, as well as John Launchi, who also directs.

I’m not sure just why those behind this series are so reticent to promote and take credit for Help Yourself—there are some solid gags here, and it is certainly easy to look at—but whatever the reason, it’s refreshing. For once here’s something that you can stumble upon that hasn’t already been puffed up by endless spammy tweets and self-congratulatory press releases. Others could take note. But not you, Scott—keep those pics of your adorable leopard print bengal kitten coming.