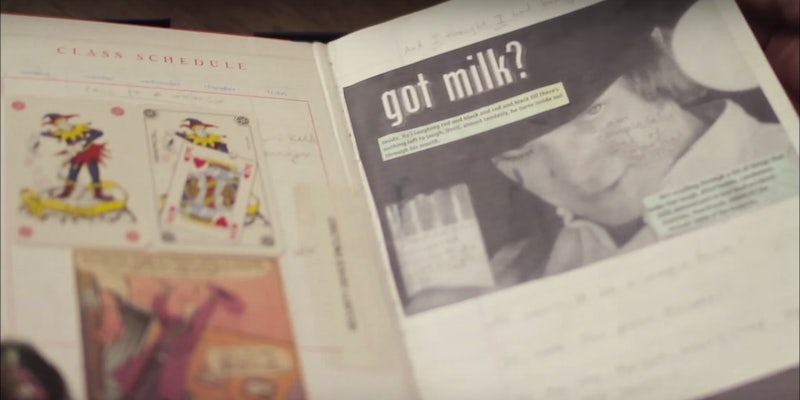 It's not the first time we've seen it, but it's still quite chilling.

A clip from a 2012 documentary shows just how far Heath Ledger went to prepare for his iconic and haunting turn as the Joker in The Dark Knight.

Ledger, who died in 2008 and won a posthumous Oscar for the role, famously prepared for the role by locking himself up in a hotel room in London. He kept a diary, practiced different voices to find his take on the Joker’s voice and laugh, and tried to figure out the character and what made him tick.

In this 48-second trailer, Ledger’s father Kim flips through his son’s Joker diary, which was full of photos of Malcolm McDowell as Alex DeLarge in A Clockwork Orange, clowns, hyenas, and the Joker from the Batman comics. Scribbled on the final page is a rather ominous “BYE BYE.”

While some outlets are reporting that the diary video is from an upcoming documentary called Heath Ledger: Too Young to Die, it’s actually from an episode of the German documentary Liebling der Götter, which aired in 2012. The clip first made its way to YouTube in 2013 while the actual clip was posted again in 2014.

But despite the clip being three years old, it has the same effect then as it does now: chills for those who watch it.