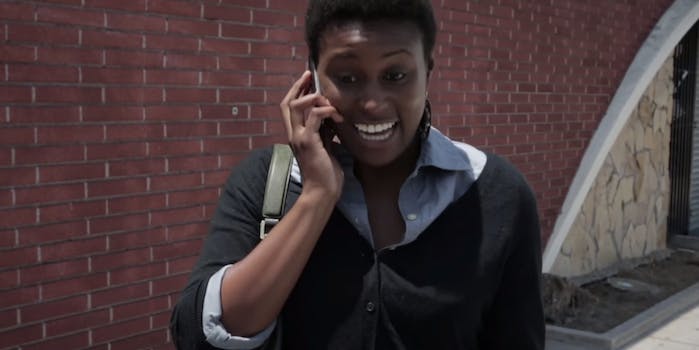 HBO has ordered a pilot from co-creators and writers Issa Rae and Larry Wilmore. Insecure, a half-hour comedy, will feature Rae and tackle similar themes to those found in her hit webseries, Awkward Black Girl.

Rae released Awkward Black Girl in 2011 and soon gained a tremendous following on YouTube and critical acclaim for her realistic portrayal of being young, black, and female in contemporary society. She was featured on Forbes’s 30 under 30 Entertainment list in 2012, and won the Shorty Award for best webseries.

Since then Rae has produced a second season of Awkward Black Girl and has worked diligently to promote and produce new and diverse voices through her Color Creative initiative.

Rae’s work is highly watchable, witty, and almost always adopts an easy, laid-back tone. But her subtly pointed narratives unearth deeper revelations about the complications of being black in contemporary America.

Rae spoke to the Daily Dot in December about her most recent project, a new webseries, The Legend of Human Black Guy, which was inspired by the aftermath of unarmed teen Michael Brown’s death at the hands of a Ferguson, Mo., police officer.

“This is my tool—creating images and creating a narrative. This is my way of humanizing black men,” she said.

The HBO project was set up in the summer of 2013, and since then Wilmore has become the host of Comedy Central’s The Nightly Show. It’s unclear what level of involvement he will maintain. The project is underway, however, and currently seeking a director and a showrunner.