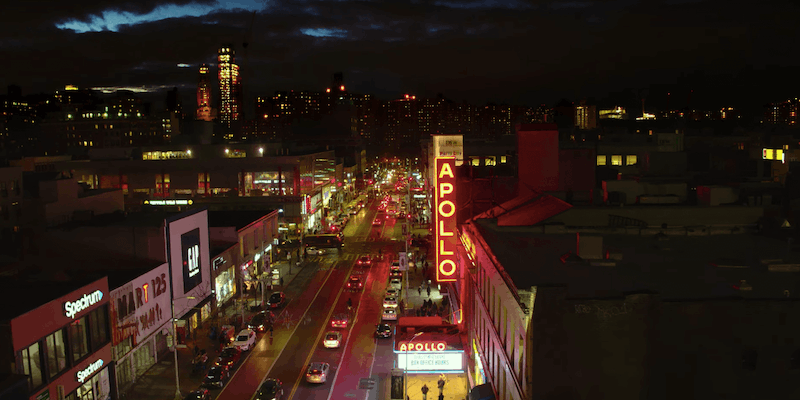 Director Roger Ross Williams celebrates the past and looks to the future of one of Harlem’s most celebrated cultural hubs.

The Apollo is a documentary about the history of the legendary Apollo Theatre, but it is also a poignant celebration of Black art. Oscar-winning director Roger Ross Williams’ film shows archival footage of some of the many names that once graced the stage—from Duke Ellington and Stevie Wonder to LL Cool J, Chris Rock, and Dave Chappelle—while pondering the theater’s future.

Throughout the film, music historians and Apollo employees and regulars discuss what the coming years hold for the venue. Williams explores two possibilities: The theater can serve as a historical monument or a place to celebrate current Black art. The Apollo points to the latter, following the preparations for a production of Ta-Nehisi Coates’ Between the World and Me, a poignant father-to-son telling of the realities of being Black in America.

Williams has built a vibrant tribute to the Apollo. The archival footage alone makes the documentary worth the watch, featuring clips of protest music such as Billie Holiday singing “Strange Fruit,” James Brown’s rendition of “Say It Loud, I’m Black and I’m Proud,” and Barack Obama singing Al Green. Paired with firsthand memories of those who were there and commentary from music historians, as well as present-day hopefuls, it’s easy to view the Apollo Theater as a living, growing organism. The cinematography is graceful; the footage, photographs, and documents—such as notes about each entertainer’s performance—span more than 50 years, but the transitions never feel visually jarring.

The most interesting event in the Apollo’s history is the weekly Amateur Night, an attraction that still exists today. In its heyday, it served as a proving ground for emerging artists because of its notoriously tough audience. A 13-year-old Lauryn Hill is seen being booed, Chappelle explains that Amateur Night audiences prepared him to face harsh criticism, and jazz icon Ella Fitzgerald talks about her first time singing in a bid to please the vicious crowd.

Sometimes The Apollo’s strengths are also its weaknesses. The amount of archival footage alone is staggering, and watching the performances change over the years is engaging. The performers that have taken the Apollo stage since 1932 can and have been the subject of countless documentaries. There’s a lot of history fit into The Apollo’s runtime, and it can start to feel like a blur.

With The Apollo, it’s clear that Williams aspired for more than a simple retelling of the Apollo Theater’s history. As the documentary ends with a segment from the theater’s production of Between the World and Me, it’s easy to see The Apollo for what it really is: a fond tribute to a venue that gave many their start when no one else would, and a triumphant celebration of Black art across genres and decades.

Vince Bellino is a music and entertainment writer based in Philadelphia. His work has appeared in Decibel Magazine and Philadelphia Weekly.