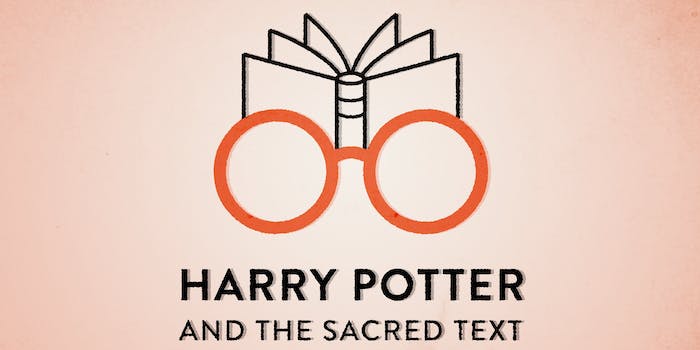 We can’t get enough Harry Potter. Since J.K. Rowling released The Sorcerer’s Stone in 1997, we’ve become obsessed with the wizarding world through books, movies, theater, and theme parks. It’s hard to get exact numbers for the amount of people who have consumed the Harry Potter franchise, but it’s estimated that the first book alone has sold more than 100 million copies.

Readership numbers this high put Potter in a league with very few rivals: Apart from maybe Tolkien and C.S. Lewis, it’s basically only religious texts that can claim to have been read more than our favorite boy wizard.

It may seem odd to draw parallels between religious texts and Potter, but there are definitely similarities. They’ve all been read billions of times, and they’ve all got fanatic followings. There are billions around the globe who hold their culture’s holy text so important that they discuss it regularly, learn lessons from the book, and even live their lives based on its teachings. Why not try to do the same with the Boy Who Lived?

That’s the plan with Harry Potter and the Sacred Text, a rising new podcast from Vanessa Zoltan, Casper ter Kuile, and Ariana Nedleman. The show aims to dissect the Harry Potter books chapter by chapter, just like we would with a holy scripture, to glean wisdom and meaning from J.K. Rowling’s work. The idea is that reading them as instructive and inspirational texts can teach us about our own lives.

It’s an idea that takes a while to get used to, but strangely one that works. The pod, presented by Vanessa and Casper, focuses on one Harry Potter chapter every week with a different theme. Whether it’s using Quidditch as a blueprint for achieving our goals, how the Sorting Hat can tackle vulnerability, or looking at betrayal through the lens of a midnight duel at Hogwarts, the show comes across as surprisingly poignant.

Harry Potter and the Sacred Text is careful not to step into the English teacher trap of over-analysis. After all, it’s tricky to know exactly what J.K. Rowling meant to embed into her stories, but the show isn’t necessarily about finding the author’s original meaning, but new, fresh takes on a familiar tale. It’s, if nothing else, a fascinating way to revisit these books.

Take Chapter 12 of Sorcerer’s Stone as an example. It finds Harry in front of the Mirror of Erised, and it’s where he receives his dad’s invisibility cloak. The podcast takes a look at this section of the book with the theme of white privilege in mind; while it’s not really a topic you’d associate with Harry Potter, Vanessa and Caspar find great lessons we can learn about race and class.

The beauty of the podcast comes from the storytelling and analysis, not the production. The sound editing and mixing could use some work, and the host’s long soliloquies should take inspiration from Aaron Mahnke’s fantastic audio work in Lore. But pacing and production should get better with time.

The highs in this show come from reasoned, intelligent viewpoints on what we could all learn to take from a series of books loved so passionately the world over. Harry Potter and the Sacred Text avoids preaching, and is a show that manages to respect and reflect on a range of faiths and religions from around the world.