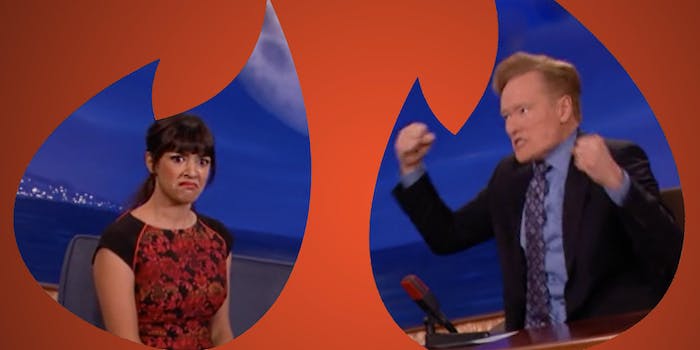 Looking to "shabangbang?" You might want to heed her advice.

TV host and New Girl actress Hannah Simone appeared on Conan on Monday night to chat about the intricacies on modern dating. Simone doled out advice for both men (compliments about women’s cats aren’t sexy pick-up lines) and women (when in doubt, pretend you don’t speak English). Because she was talking about romance, Simone also addressed what she considered to be Tinder’s fatal flaw.

Simone’s claim that “the whole concept of the app is broken” and that most of its users are looking for fundamentally different things is debateable, but at other times the actress is right on the money. She’s dished out relationship advice on Conan’s show before—namely that, if you are looking for a “shabangbang,” pubic hair art really isn’t cool, guys.