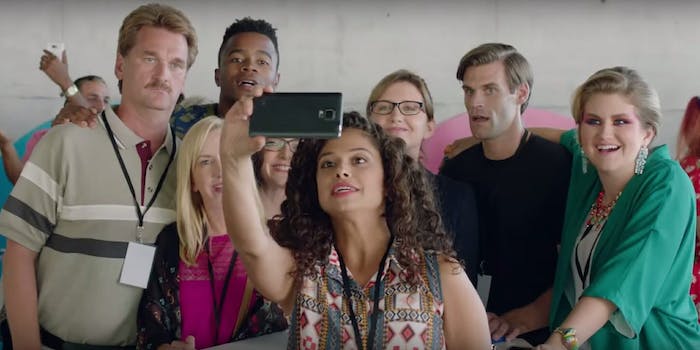 I got tricked into watching an infomercial for Israel

Want your webseries to make people interested in Israel? Make sure it doesn't sound like a sales pitch.

On pedigree alone, the new comedy webseries Hamburger Hummus looks like a winner.

It features Angela Kinsey from The Office. It’s directed by Jay Karas, who has helmed episodes of a bunch of great comedies like Brooklyn Nine-Nine, Workaholics, and that doppelgänger one of Parks and Recreation with Sam Elliott. And Jillian Bell, the best thing in last year’s 22 Jump Street, drops in despite being booked well into 2017.

But something seems fishy. Who wrote this? There aren’t any credits. Who produced it? Normally you can’t shut people up about that sort of stuff. And after watching a few of the attractively shot but underwhelmingly scripted episodes, it becomes pretty clear why.

Hamburger Hummus revolves around six Americans who have come to Israel to attend a blogging conference. Which seems an unnecessarily expensive setup—the series seems to be shot on location—especially when no one seems to want to take responsibility for it.

They check out the sights, including the spotless hospital, dine in Tel Aviv (“one of the world’s great food cities”), touch base with Israel’s dynamic—and multicultural!—tech scene, and explore sustainable energy farms.

You can probably see what’s going on here. The whole thing’s an infomercial. It’s so blatant (“I’ll prescribe some medication they don’t have in America”) that you’ll be almost sure that you can see the shadows of the representatives from whoever funded this encroaching the fringes of the screen as they implore the actors to experience more of the tolerance that the country offers.

Indeed the gay-friendly vibe is so over-egged that it’s easy to become suspicious and even suspect some kind of trap. And that’s the root of the problem. While the tone of the series was no doubt meant to be humorous, a sugary shell to hide the propaganda that you were being bludgeoned with, Hamburger Hummus comes across more like one of those militarily curated tours of North Korea where you can’t leave your hotel unaccompanied, the children in the “maternity hospital” all look about 3 years old, and the “world-leading” dolphinarium is permanently closed for renovations.

There’s nothing wrong with product placement. That’s just how things get made these days. And no one should blame the actors or director because who can resist an all-expenses-paid jaunt? But the blatant nature of the series, coupled with the invisible producers and their interesting YouTube analytics comes across as arrogant. You want your webseries to make people interested in Israel? Give us something that doesn’t sound like a sales pitch. Or at least hire a better writer.