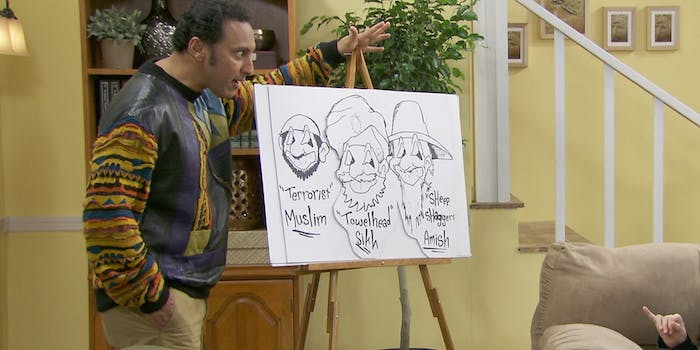 It's a fine successor to 'The Qu'osby Show.'

When in 2010 Katie Couric opined that a Muslim version of The Cosby Show was what America needed—to alter perceptions of Muslim-Americans, just as The Huxtables “did so much to change attitudes about African-Americans in this country”—The Daily Show answered the call. The sketch, The Qu’osby Show featured correspondent Aasif Mandvi and skewered the networks’ tendency to homogenize their tokenistic representations of minorities with the creation of the reassuringly non-threatening Qu’osby family—four Toby Keith-listening, swine-chewing Muslims with nary a Koran in sight.

Five years later, and after a successful Indiegogo campaign, Mandvi has resurrected the idea in the form of a webseries, Halal in the Family, which has just dropped on Funny or Die.

Advertisement Hide
Halal In The Family: Spies Like Us from Halal in the Family

The series addresses the one-note nature of the sketch—there is only so much comic momentum that can be gained from depicting Muslims eating bacon and drinking “pork juice”—with a summating coda to end each episode, tying the innocuous narrative back to a greater social observation. It’s disarmingly fun stuff, with a thoughtful core; and with its topicality, a fine successor to Archie Bunker and family.