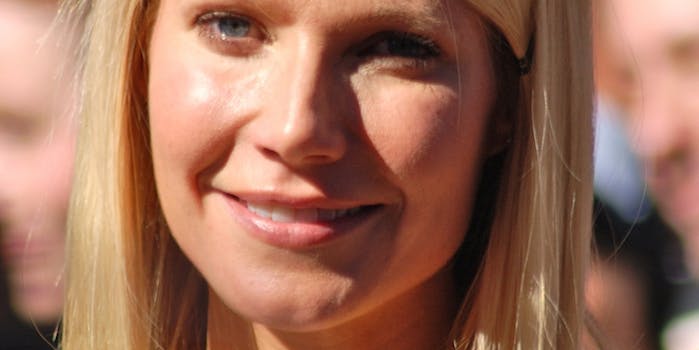 Or, rather, they are “consciously uncoupling.”

Gwyneth Paltrow’s insufferable lifestyle website Goop has been a destination for hate-readers everywhere. But today, fans looking for the hot new glamping destination were met with sad news. Paltrow and longtime partner Chris Martin, frontman of Coldplay, are splitting up.

Or, rather, they are consciously uncoupling.

Fair warning: Gwyneth Paltrow and Chris Martin are breaking up, so now Coldplay songs might be a little slow and self-indulgent.

I wonder if Chris Martin will just sit around listening to a bunch of Coldplay.

Here’s the official statement from the site:

It is with hearts full of sadness that we have decided to separate. We have been working hard for well over a year, some of it together, some of it separated, to see what might have been possible between us, and we have come to the conclusion that while we love each other very much we will remain separate. We are, however, and always will be a family, and in many ways we are closer than we have ever been. We are parents first and foremost, to two incredibly wonderful children and we ask for their and our space and privacy to be respected at this difficult time. We have always conducted our relationship privately, and we hope that as we consciously uncouple and coparent, we will be able to continue in the same manner.

If the anonymous app Whisper is to be believed, Paltrow was allegedly cheating on Martin with Pete Yorn’s entertainment lawyer brother. All this news of uncoupling apparently broke the Goop site, but perhaps Facebook will buy it now.

The hashtag #ConsciousUncoupling is, naturally, blowing up on Twitter:

#ConsciousUncoupling from my sinuses. And insomnia. And 90s micro-floral prints.