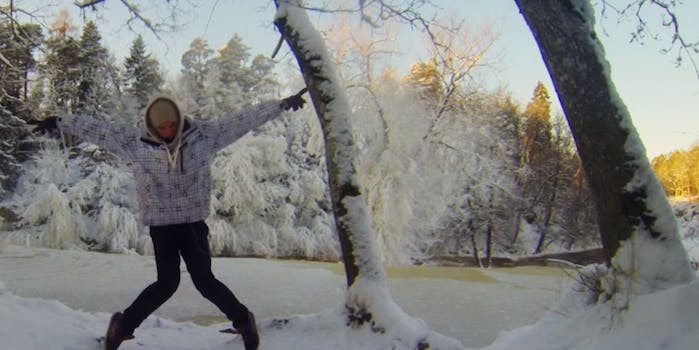 Remember the girl who learned to dance in a year? Meet her male counterpart.

Last year, Karen Cheng laid out the 10 ways to go viral by showing the world how she learned to dance in one year. On Tuesday, YouTuber Neiland showed how the same thing’s still possible if you follow Cheng’s exact same instructions.

The new one’s called “Guy learns to dance in a year (TIME LAPSE),” and it features Neiland learning to dance more effectively through five scenes—each set on a different day within a 365-day period. More than 162,000 people have watched it since its Tuesday posting, including 10,000 in the time in took us to post this article, but it’s likely Neiland knew that was coming. After all, Cheng laid out the recipe last July. Since, her video’s eclipsed 3.8 million views, and she’s found similar successes elsewhere.

To a T, all the way down to the various acknowledgments of “possible sponsors” in the video’s description area, Neiland follows the 10 commandments of Cheng’s success. He told a story, kept the clip under two minutes, and dropped it on a Tuesday, made sure to get proper video angles and keep the cat in the shot in the first clip. He wrote a viral title—hell, he wrote the same title—then presumably decided to compromise on his beliefs that he’s an original creator.

He buried a shoutout to Cheng’s video late in his description’s text, after links to tracks used throughout, mentions of GoPros, taking the time to explain how he hopes “this video inspires you to do the things that you really want to do. The things that make you feel good and happy.”

The only recommendation Neiland didn’t follow is the one about making it easy for the media to get ahold of him. “I linked to my blog, website, and Twitter from the video,” Cheng wrote. Neiland linked to none. So we won’t be talking to him, and we’ll never find out how long he’s actually been able to dance.