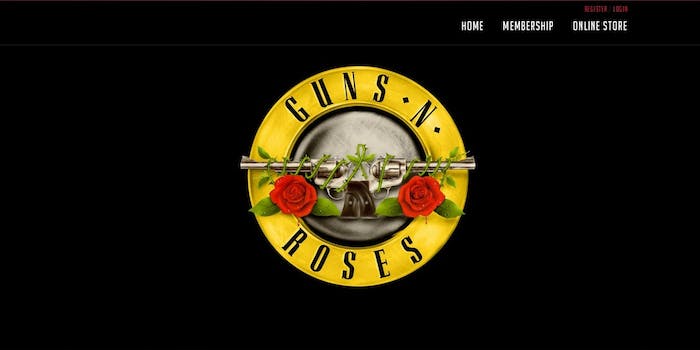 Even Mr. Brownstone would be happy about these developments.

Is Guns N’ Roses finally getting back together? If these signs are any indication, the answer may surprise even the biggest fans.

The original Guns N’ Roses lineup hasn’t been intact since the band kicked out drummer Steven Adler in 1990. And the band’s remaining members—singer Axl Rose, guitarist Slash, and bassist Duff  McKagan—haven’t played together since 1993.

Though Rose has maintained a band under the Guns N’ Roses name, he’s the only original member in it.

In recent months, however, there have been major rumblings about a potential reunion of the original GNR lineup. Though none of the members are talking publicly, a few signs have percolated to the surface that suggest such an announcement is brewing.

The band also updated its Facebook cover photo with the following picture, leading some to speculate that GNR is about to announce a reunion and a subsequent tour (kicking off at Coachella in April, according to rumors).

Making matters even more interesting, this quick, mysterious trailer featuring “Welcome to the Jungle” has begun showing up in the previews before the latest Star Wars movie.

The rumors truly began in earnest when Slash said this past summer that he and Rose had reconnected and that their past personality problems had dissipated.

“It was probably way overdue, you know,” Slash said in August. “But it’s…. you know, it’s very cool at this point. You know, let some of that, sort of, negative… dispel some of that negative stuff that was going on for so long.”

Asked at the time about a possible GNR reunion, Slash remained frustratingly vague. “Oh, I couldn’t answer that one, though,” he said.