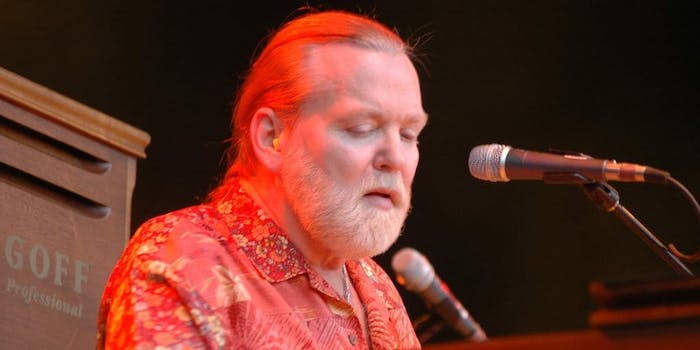 Gregg Allman, one of the architects of Southern rock, died Saturday at 69 years old. The founder of the Allman Brothers Band succumbed to complications of liver cancer in Savannah, Georgia, according to CNN, and almost immediately, musicians and fans flocked to Twitter to mourn his loss.

Including his ex-wife, Cher.

Musicians from all across the spectrum also paid tribute to Allman on social media.

Broken heart. Gregg Allman I will miss you. #RipGreggAllman 💔 pic.twitter.com/bsdahxIX0i

He showed me his tattoos… his voice…. his soul. #GreggAllman pic.twitter.com/pGhgyhjcMV

Having trouble putting into words the loss I feel over Gregg Allman's death. The Brothers were icons, Olympians to look up to in music, for1

What a legacy @GreggAllman leaves behind. Jam on in the great hereafter.

After the most tragic week for music, more sad news. Another great musician, @GreggAllman, has left us. Much love to his family & friends. pic.twitter.com/9NuTBIEpLT

Goodbye, Brother Gregg. When @amandashires was pregnant, @GreggAllman pointed at her belly and said "It's gonna be a girl. I'm never wrong."

Allman reportedly will be buried at Rose Hill cemetery in Macon, Georgia, the same place where his brother, Duane Allman, and Berry Oakley—two other founding members of the Allman Brothers—have been buried.