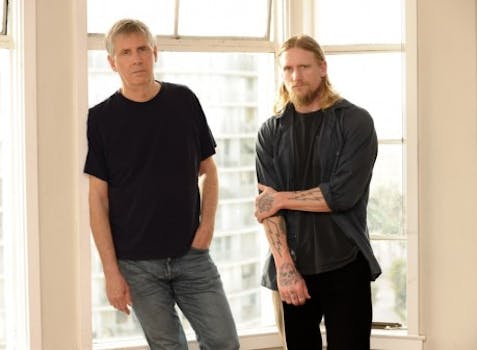 Good for You: A Spotify guide to Greg Ginn’s new band

Mike Vallely of Good for You discusses his new project with the iconic Black Flag guitarist.

In Spotify Essentials, the Daily Dot curates custom playlists created by some of our favorite artists, staff writers, and Web community leaders. This week, Mike Vallely of Good for You discusses his new project with Black Flag guitarist Greg Ginn.

While recording vocals for Good for You’s debut LP on SST Records, Life Is Too Short to Not Hold a Grudge, I spent two full weeks in Casa Destroy Studios in Taylor, Texas with producer/guitarist and cosongwriter Greg Ginn and engineer Mike Shear. It was a fun, loose, creative, and very productive time, where I put vocals down on some 45 different tracks.

I lived in the studio, literally, sleeping each night on the floor underneath the microphone. We put in full days and nights, pausing only to eat and sleep. We didn’t really listen to much other music while in the studio, but in the rare spaces between sessions we did talk quite a bit about the music we liked and were inspired by. The following are some notes from those conversations and the following playlist I’ve assembled is representative of the studio vibes we were feeling while working on our record.

We talked about AC/DC a lot. Greg and I both rank Bon Scott as one of our favorite frontmen ever: Pick any Bon Scott song—there really isn’t a bad one. But, we also both felt that Back in Black is by far AC/DC’s finest studio album ever, which ironically features Bon’s successor Brian Johnson. For us it was about the production, songwriting, and the obvious spirit of Bon that infused the the Back in Black record, and we both felt that Brian Johnson proved to be, in that moment, the perfect lightning rod of true intensified yet humble inspiration. Unfortunately, Spotify only carries one AC/DC track, “Gone Shootin’” from the Beavis and Butt-Head Do America soundtrack.

Since these were vocal sessions, we talked a lot about singers. Not that I was trying to channel any of these folks, clearly I couldn’t and can’t. More so our conversations were about the spirit that these vocalists that we love embodied. Lynyrd Skynyrd’s Ronnie Van Zandt is another singer we both ranked up at the top. His songs have an authenticity to them that cuts through any filter. There’s no doubt that Lynyrd Skynyrd’s “Cry for the Bad Man” has a few distant cousins in the material that we were working on for Life Is Too Short.

I worked on lyrics for the album over the course of some five months or so before entering the studio. During that time I went to see a then-62-year-old Bruce Springsteen literally bring the house down at the LA Sports Arena. I’ve seen well over 20 Springsteen shows through the years, but this one in Los Angeles in 2012 may just be the greatest rock show I’ve ever seen. And although it doesn’t quite eclipse the impact that seeing Black Flag had on me in 1984, it affected me in somewhat the same way: propelling me forward.

Bridging the topic of the Boss with Greg seemed a bit strange, but Greg understood what is was that I saw and get out of Bruce and his music, because Greg had seen him play in the ’70s in L.A. and knows that he delivers. “Adam Raised a Cain” live is one of the most intense Springsteen songs ever. It’s Bruce for those who don’t think they could possibly like Bruce.

There’s Black Sabbath and Black Flag, and then there’s Black Oak Arkansas and the Black Crowes, two bands Greg spoke about numerous times during our sessions. Clearly, Greg loves Luthur Dickinson’s guitar playing, but he also feels that the Crowes embody what rock is all about and yet, they still move it forward. I was personally unfamiliar with Black Oak Arkansas. This led to our longest non-food or sleep-based studio break, where Greg educated me through song and video documentation: “Jim Dandy” on YouTube, live at California Jam in 1974, a show that Greg himself attended.

At one point our discussions somehow lead to “Who Was the Greatest Canadian Rock Band Ever?” Greg said that although he really liked Rush, he felt that the Guess Who stands out as Canada’s greatest gift to. For me, Rush was an important precursor to punk rock. I got the Rush album Signals for Christmas in 1982. “Subdivisions” was something I could really relate to—something I could feel—a song about being a cast out. This was relatively uncharted territory in most of the bravado of the rock music that I was used to. We would go on to spend a bit of time talking about Neil Peart, the drummer and lyricist for Rush, but Greg always hedged the Canadian conversation back to the Guess Who and “These Eyes.”

One discussion naturally led to “The Greatest American Rock Band Ever.” I didn’t even blink: KISS. Greg looked at me like I was crazy. KISS? “They’re horrible. Their guitarist is horrible. Their drummer is horrible,” he said. (Little did Greg know that I have an Ace Frehley tattoo on my right calf.) I countered that they are the American Beatles, and that Stanley and Simmons are our Lennon and McCartney. Greg’s eyes rolled in his head. He said, “I’ll give you this… Gene Simmons is an incredible bass player. His playing alone is exceptional. He rarely makes a mistake, even with all the theatrics, and he just has a great sound and tone.” “100,000 Years” is a track off of the first KISS album, KISS, and features Gene’s signature driving bass which Greg and I both agree is rocking! That’s about all we got out of this particular topic.

Guitarists. It’s a hard topic to avoid when talking with one of the greatest of all-time. Angus Young, Tony Iommi, Jack White and Luthur Dickinson were all discussed several times, amongst others and in great detail. (Sadly, not Ace Frehley.) Surprisingly, Greg reeducated me on Prince. We watched a video of him playing with Tom Petty, Steve Winwood, and Jeff Lynne at the Rock & Roll Hall of Fame. I’ve always loved Petty, and Lynne definitely kills the vocals on the George Harrison track “While My Guitar Gently Weeps,” but when Prince steps in for an extended solo he seems god-like. “Purple Rain” is a Prince track I’ve always dug and no doubt, I now really hear and appreciate that guitar solo cutting through more than ever.