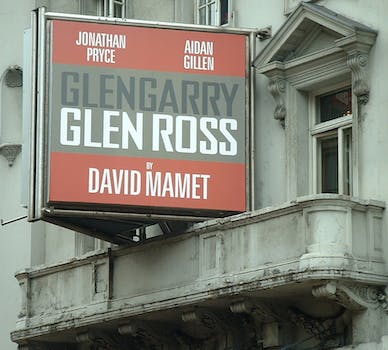 “Glengarry Glen Ross” to be tweeted by bots

Let’s talk about something important.

Put. That coffee. Down.

Introducing Twitter Bot Theater, where starting Monday at 1 p.m.  Eastern Time, 11 automated Twitter accounts will, in real time, perform the 1992 cult classic film Glengarry Glen Ross. Users can go to the site to see the characters tweet their lines in turn, or, if for some reason they only want a few characters, they can follow the characters individually on Twitter

The profane David Mamet screenplay, adapted from his Pulitzer-winning play, seems perfect for such an experiment. Its characters speak in a tight, brutal staccato dialogue, and—let’s face it—there’s only 11 characters to program.

Twitter Bot Theater is the brainchild of 29-year-old Web tinkerer Chris Barker, a freelance advertising writer who’s responsible for, among other things, a campaign to bring Larry David to Twitter.

“I’ve always loved GGR, and usually force my friends to watch if they haven’t,” Barker told the Daily Dot via email.

Barker spent a Saturday transcribing the movie. (It’s different from the play script, which doesn’t even include Alec Baldwin’s Blake character.)

Barker, however, “wanted to have a little fun” with bots.

“I was going to do The Big Lebowski, which probably would have been more popular, but there are like 50 speaking roles,” he said. “It would have taken me forever to set all that up.”

So he chose Glengarry Glen Ross. Beats a set of steak knives.