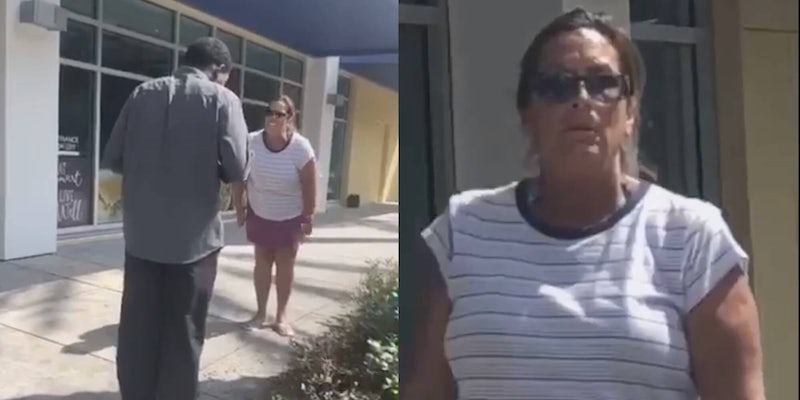 She's been nicknamed 'Pick it Up Peggy.'

A video sweeping social media shows a Florida woman hurling the N-word and cursing at a Black teenager outside of a park in St. Petersburg, Florida. The woman has been nicknamed “Pick it Up Peggy”  on Twitter.

The few-seconds long video, posted on Facebook by user Daysha Adriana, shows a woman wearing sunglasses and screaming at the boy as he stares at his phone.

According to Adriana’s post, the 14-year-old had dropped a gum wrapper and was going to pick it up until the woman started screaming at him.

“Almost 2020 and we still are dealing with being spoken to in this manner over what exactly?” Adriana wrote in the post. “A gum wrapper. Tasteless.”

At the beginning of the video, the woman says, “Nuh-uh, don’t lean back like that.”

The boy is seen looking down on his phone. “Pick it up, find it, get down on your knees and find it,” the woman yells.

“Get down on your knees and find it,” she says again as the teenager, who has not been identified, laughs and turns around to walk away.

When the woman realizes she’s being filmed, she says to the camera, “Film me, fuckers… film me.”

The Facebook video, which was posted on Sunday, has garnered more than 150,000 views and thousands of comments and shares.

People on Twitter expressed their outrage, with some commenting on how polite the teen was in the face of such hatred.

This wasn't about littering for her. It was about exerting her privilege and perceived sense of superiority. She had his attention until she came with the "get down on your hands and knees" BS.

Even before she said the n-word, the "Get down on your knees" was telling.

“Disgusting but this is what her history represents! Such a disgrace I’m so happy he loved hisself enough to not pick up whatever she was yelling about,” one user commented.

St. Petersburg City Council member Steve Kornell on Sunday shared the video and called for help to identify the teen to “honor” him for his politeness.

“If anyone knows this young man I would love to honor him at this week’s City Council meeting for his extreme politeness towards this woman who did not deserve it at all,” he wrote. “It says a great deal about him and about her.”