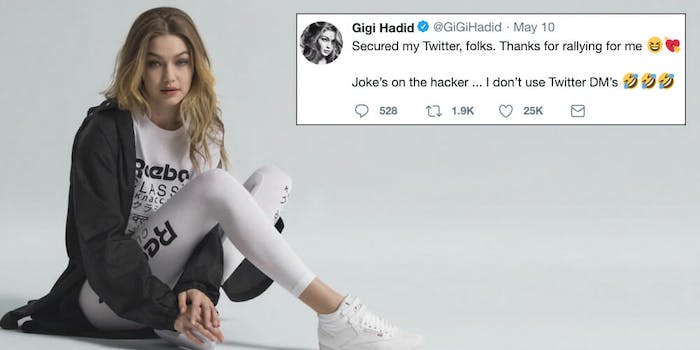 The Twitter account of supermodel Gigi Hadid appeared to be hacked Friday after a series of racist and antisemitic remarks appeared on her profile.

Those tweets, which began appearing shortly after 11pm EST, included frequent use of the N-word as well as references to Nazi Germany.

“Hitler did nothing wrong,” one of the tweets read.

A screenshot of an alleged conversation held between Hadid and celebrity Kendall Jenner over Twitter direct message from 2013 was also posted.

Hadid’s account, which boasts more than 9 million followers, was seemingly restored roughly 30 minutes after the incident began. Hadid responded to the apparent hack by thanking her fans for standing behind her.

“Secured my Twitter, folks. Thanks for rallying for me,” Hadid said. “Joke’s on the hacker… I don’t use Twitter DM’s.”

Secured my Twitter, folks. Thanks for rallying for me 😆💘

Hadid also denied being behind the crude comments in a statement to her Instagram followers but later deleted the post.

“Hope it goes without saying… my Twitter was hacked,” Hadid said.