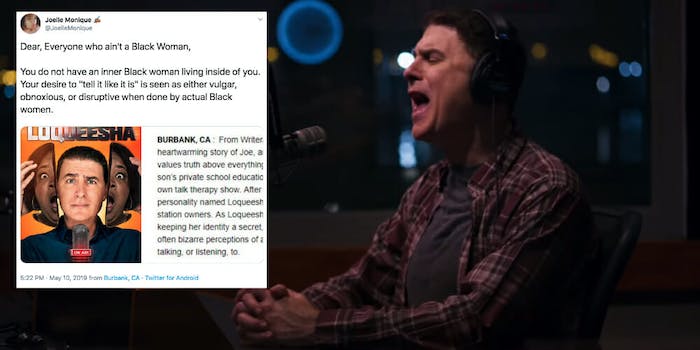 Yes, that ‘Loqueesha’ movie trailer is real, and the internet hates it

The film is about a white man portraying a black woman.

A trailer for a film called Loqueesha dropped on Friday.

The film—debuting in the year 2019—is about a white man portraying a Black woman. What could go wrong?

In the trailer, a white man—instead of finding a job using his white, male privilege—embodies an extreme caricature of an offensive black woman’s stereotype to create a popular, sassy radio talk show. He does this to make enough money to send his kid to an elite private school.

Needless to say, there’s a lot to unpack.

Of course, the internet hates everything about the film. There is just so much wrong with it.

This will definitely go over well in 2019. pic.twitter.com/UgaNE77p5T

The LOQUEESHA trailer counts as a hate crime.

I watched that horrible Loqueesha trailer and it made my blood boil. A grown white man is a failure in life and fantasizes that his goals are easier to accomplish as a Black Woman. A double minority? It’s 2019 and they’re still using us as scapegoats. Okay, Amy Fisher pic.twitter.com/hY2x0D20lq

I challenge everybody involved in making the #Loqueesha movie to a fight. Cage style. One by one. Actually, fight to the death. I am fucking on fire. That's the only way to unleash this rage. What is this garbage.

"Loqueesha" broke my brain for the day.

At first, many thought it had to be fake because a film that out-of-touch couldn’t have possibly been made in the year: 2019. Yet here we are.

I think the “Loqueesha” movie trailer is fake. I HOPE it’s fake. But I think… it’s fake? But maybe 3 years in Hellworld so who even knows anymore?

Loqueesha is a real movie?? Who thought this was a good idea? pic.twitter.com/eU4PJ3NNoe

What in the blackface HELL is this?!!! —-> “Loqueesha is the hilarious and heartwarming story of Joe, an astute and underachieving Detroit bartender who values truth above everything” who “invents a larger-than-life black female personality named Loqueesha” https://t.co/e5W6TqVifE

People also couldn’t get over the trivia portion of the film’s bizarre IMBD page.

It just keeps getting better. Oh my lord. This is the IMDb trivia page for LOQUEESHA. pic.twitter.com/DiJFXY1bUw

Everybody is (rightly) talking about what a dumpster fire the trailer for #loqueesha is, but I think it's also equally important to see that there's already some choice trivia on its IMDB page pic.twitter.com/yPnedB9aFu

The IMDb trivia for #Loqueesha is fucking great. What a tone deaf turd of a movie. pic.twitter.com/x2IP9U14pH

The trailer begs the question: Were any Black people consulted when making this film? According to the film’s IMBD page, Jeremy Saville, who plays the main character, also directed and wrote the script.

The Daily Dot has reached out to October Coast, the public relations company for Loqueesha.