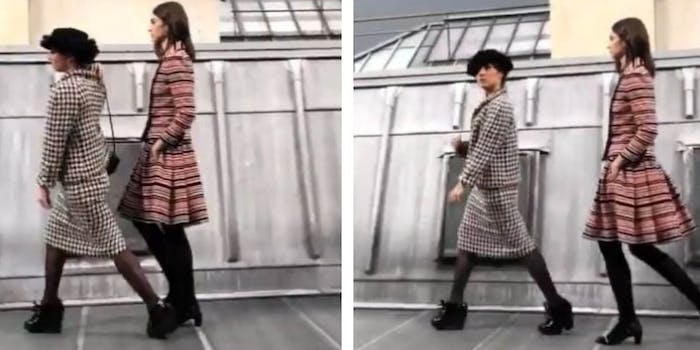 Watch this YouTuber crash the Chanel catwalk, as Gigi Hadid boots her from the stage

A supermodel had to play the role of security guard.

A popular French YouTuber crashed the catwalk during a Chanel fashion show in Paris on Tuesday, and she created quite a stir as she nonchalantly joined the other models onstage while security guards tried and failed to stop her.

YouTube star Marie S’Infiltre, who has 227,000 subscribers and whose real name is Marie Benoliel, jumped on the catwalk and joined the parade of supermodels showing off the 2020 spring collection. Eventually, she was stopped by supermodel Gigi Hadid, who had to play the impromptu role of security.

As Newsweek noted, the YouTuber is known for “her satirical style of comedy mocking French bourgeoisie.” So, it seems to make sense that she would try to upend a high-end fashion show.

As video of the incident shows, Marie S’Infiltre emerged from the crowd and jumped onto the catwalk dressed in a houndstooth suit and a black hat. The model behind her briefly slowed her walk and then everyone walking behind her continued as normal.

The YouTuber looked to the crowd and, with an exaggerated hip sway, paraded around like she was a normal part of the show.

Someone stormed the runway finale and joined the models @CHANEL watch! #pfw pic.twitter.com/Wp4L3yEccP

Best @chanel finale video ever: Spot the catwalk- crasher! And spot the security guys running after her! #PFW pic.twitter.com/Wztgsj3jVq

A few seconds later (though a few seconds later than you would expect from a security force), guards appeared to run after her. Eventually, supermodel Gigi Hadid—who recently had her Twitter account hacked but who will not put up with your body-shaming bullshit—and a few of her colleagues helped restore order and got Marie S’Infiltre off the stage.

As journalist Tyler McCall wrote on Twitter, “Omg a woman literally just CRASHED the Chanel finale and @gigihadid just bounced her off stage, what an iconic moment.” Hadid’s actions were important because reportedly the security guards couldn’t figure out which woman was the imposter.

Omg a woman literally just CRASHED the Chanel finale and @gigihadid just bounced her off stage, what an iconic moment pic.twitter.com/Rsk3dJkwKJ

Hours after the infiltration, Chanel released a statement, via WWD, that said, “This person is a comedian known for this type of prank. She had crashed another runway recently. Her presence on the catwalk was not planned. Security guards simply led her to the exit at the end of the show.”

For her part, the social media star, who crashed an Etam fashion runway the week before, seemed pleased with her stunt.

On Instagram, she posted a photo of herself and wrote “Le défilé étam c’était walou à côté.” That, according to Newsweek, is roughly translated to mean, “The Etam runway was nothing in comparison.”