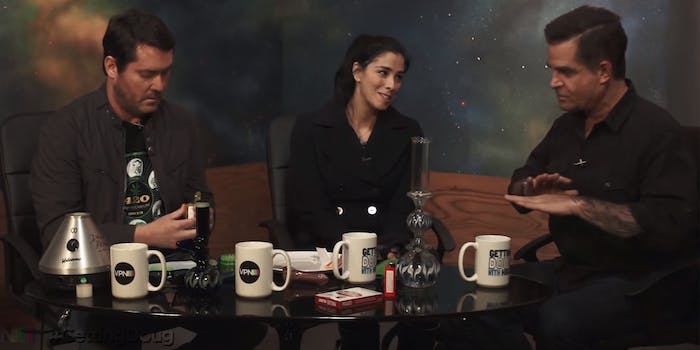 ‘Getting Doug With High’: The Internet’s greatest talk show about weed

Getting Doug With High is perfect 4/20 material. It’s like Charlie Rose about nothing.

Comedian David Cross sat down on the set of Getting Doug With High, looked at the mass of weed and paraphernalia laid out on the table in front of him, and happily wondered “what the fuck is the point” of the show he had signed up for.

The clock rolled from 4:19 to 4:20, the lighters sparked, and the smoke billowed up.

Ah, so that’s the point.

Getting Doug With High is as simple as a webseries can be. Comedian Doug Benson, a longtime marijuana advocate and stoner comic star of Super High Me, brings in other comedians, gets them high with weed and smoking devices from legal sponsors in states like Colorado, and talks.

“A lot of the people watching at home are high,” host Doug Benson said. “It’s like getting high with your favorite celebrities.”

In addition to being a surreal comedic experience, Getting Doug With High is meant to prove a point: Marijuana is fine. Two or three famous people sitting, smoking, and giggling is the anti-Reefer Madness, a 1930s anti-pot propaganda film that has entered the canon as one of the funniest weed movies ever made.

A majority of Americans now favor legalizing marijuana. So while it’s not exactly a move of sheer political bravery to appear on the show, it is a strong endorsement of the political sentiment.

“People shouldn’t feel shame for enjoying marijuana,” Benson told Yahoo News. “I like having guests on my show who are happy to smoke on camera and show the world that you can get high and have fun and nothing terrible is going to happen.”

And as far as the ingredients in talk show goes, stoners have long suspected that weed would be an excellent addition to late night television. On Getting Doug, celebrity guests are properly loosened up. Every celebrity talk show has a basic script and segments, but when the host and guest are both floating up into the clouds, conversation can take unexpected turns both good and bad.

David Cross, a piece of well-buttered toast by 30 minutes into the show, dove into talking about his extensive history of drug use. He gave an honest impression of his single, memorable experience smoking crack.

“It was amazing,” he said, “and I’m so glad I left and walked away. I knew that if I didn’t, my life would change.”

The conversation is slow, meandering, funny, often pointless, and pretty close to perfect.

Comedian James Adomian talked about smoking weed with CNN anchor Wolf Blitzer, and Tommy Chong said that he inspired Jordan Belfort to write Wolf of Wall Street when the two met in prison in 2004.

Occasionally, of course, the talk can be grueling. When a guy like Todd Glass smokes weed, he becomes even more self-conscious and long-winded than normal. Benson anticipated the problem, however, and booked a hilarious Sarah Silverman as a counterweight, thus hitting the right equation and saving the episode entirely.

“I think making jokes about weed helps to make it more mainstream,” Benson told the Eugene Weekly. “Or at least I hope so. While legalization is a complicated issue, the bottom line for me is that no one should be incarcerated for weed-related crimes. Unless they steal some of mine.”

Getting Doug With High is perfect 4/20 material. It’s like Charlie Rose about nothing. Plus, it’s a goldmine for green philosophizing.

“If the whole earth was a little more sleepy and lazy,” Horatio Sanz said in a recent episode, “there’d be a whole lot less wars, man.”