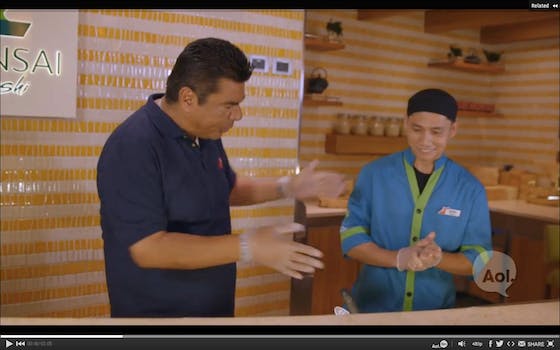 It’s called content marketing, and AOL is on board with all hands on deck.

Courtesy of a partnership between AOL, Carnival Cruise Lines, and actor/comedian George Lopez, we are presented with Laughs on Deck, a series heavy on commercial presence and light on memorable content.

Lopez goes on board an assortment of cruises and takes on some unfamiliar jobs, including that of a sushi chef, recreation director, and line cook for the ship’s burger joint. Unlike the more serious reality shows where a company executive goes in disguise to unearth issues at his or her company, Laughs on Deck is played strictly for humor. In the segment where George takes a turn making California rolls, the guests immediately recognize him, which makes the show’s premise somewhat lame. The dialogue is a tad too cornball, too, and it’s loaded with not-so-subtle shots of smiling cruisers having the time of their lives. If Lopez’s antics inspire you to book a stateroom for your next vacation, fear not, just click above to video window to set sail to Hawaii.

Content marketing, which has around for decades in some form, can loosely be defined as brands (cruise lines, smartphone manufacturers, car dealers) using advertorials, images, videos, and all sorts of “content” to connect with consumers. It’s about merging captivating media with clever messaging to encourage purchases or improve a brand’s status among eager shoppers.

AOL is smart to ride the wave of content marketing mania not only with Laughs on Deck, but with Breaking Boundaries featuring actor Andrew McCarthy and a new series starring Kevin Nealon called Laugh Lessons. How long this trend of sponsored video lasts is a question only those who spend millions on marketing can answer for sure. In the meantime, AOL hopes to take full advantage of this current advertiser-friendly phenomenon.

Viewers can find all episodes of Laughs on Deck on AOL’s website.