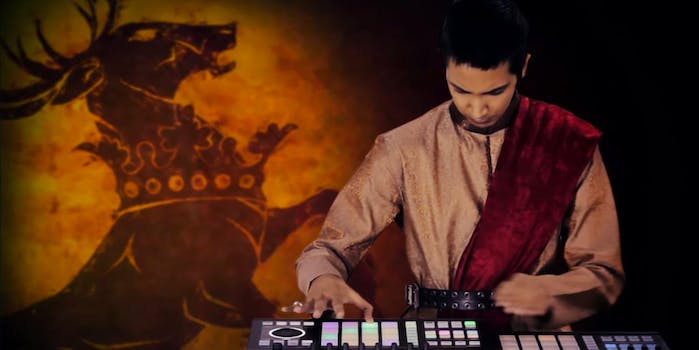 ‘Games of Thrones’ intro gets an EDM remix

It's A Song of Ice and Fire, the remix.

As water is to earth, so is 70 percent of the Internet covered by reinterpretations of the Game of Thrones opening theme. From smooth jazz renditions to goats yelling, you’d think at this point humanity would have exhausted all the conceivable ways to cover and recover the show’s beloved theme.

But before you buy your ticket to DJ Hodor’s “Rave of Thrones,” take a minute to enjoy the MetroGnome’s remix of the Web’s favorite tune.

It might just seem like a fan and his drum machine at first, that is until a beat more explosive than the Battle of Blackwater Bay drops with Tyrion screaming “Fuck the king!” This EDM remix is sublimily woven with screams of “Hodor” and Arya naming the list of men she intends to kill over the finest dubstep in all of the seven kingdoms. It’s truly a song of ice and fire like you’ve never heard it before.