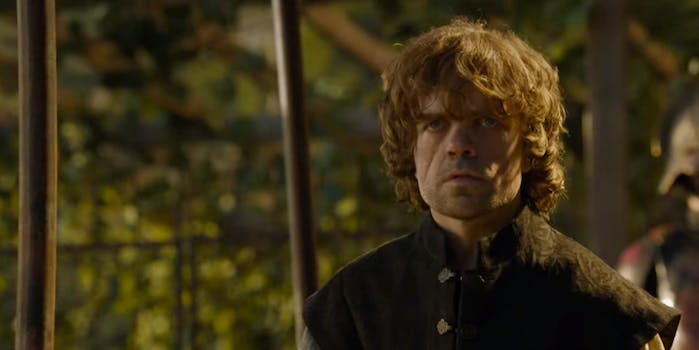 One of Game of Thrones’ most devastating moments may have been spoiled on Instagram two months ago.

Warning: This article contains spoilers from Sunday’s Game of Thrones episode, “The Mountain and the Viper.”

Even the most casual Game of Thrones viewer knows to avoid spoilers on social media following an episode, but now we have to try to avoid them even before the episode airs.

The final moments of “The Mountain and the Viper” were devastating, to say the least. Even though we’ve been through this many, many times before, we fell in love with a character and his very hopes and dreams (along with his skull) were crushed in front of our eyes.

Fans were quick to call Oberyn Martell’s death the worst thing they’ve seen on TV since the Red Wedding, and the book readers, apt to remind everyone that “they knew it was coming,” were shocked at just how brutal and gory the scene played out.

Jesus Christ, Game of Thrones. Even when I know what’s going to happen, you manage to kick me in the stomach.

But, as the credits started to roll, people had realized that they had seen one aspect of the fight between Oberyn and Ser Gregor Clegane before. Two months ago, in fact, on Lena Headey’s Instagram account.

The photo of Headey and Pedro Pascal, who played Oberyn, came from a photoshoot they did in Hunger Magazine. A screenshot of the magazine article, where Headey interviews Pascal, appeared on WinterIsComing.net in March.

The photo itself showed up on Instagram in April. At the time, it looked like two costars and friends horsing around in a photo shoot. Now that we’ve finally witnessed how the Red Viper met his end, it doesn’t look quite as innocent.

And this isn’t the first time that Headey’s Instagram account has provided potential spoilers. We’re still waiting to see if another photo she posted in April will play out in two weeks’ time.

That isn’t to say that every single thing that a Game of Thrones actor posts on social media is a spoiler. Yes, there is that risk, especially for the actors who like to livetweet the show, but if that was the case, many of us would be left scratching our heads over what alternate universe something like this would happen.

Photo via Game of Thrones/YouTube