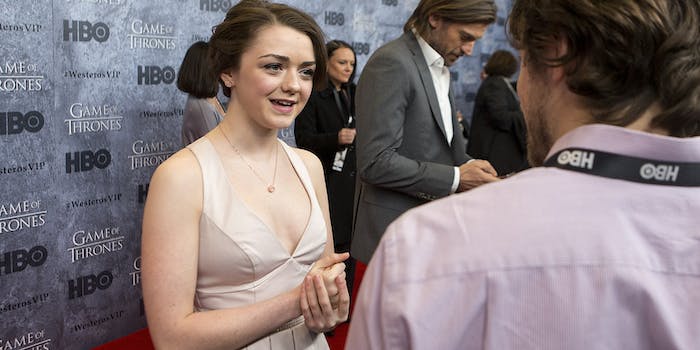 Watch your favorite ‘Game of Thrones’ actors nail their auditions

'Game of Thrones' actors win their roles in these unearthed audition tapes.

With its fifth season set to premiere in April, it’s difficult to imagine the Game of Thrones characters that we’ve come to love being portrayed any differently. In the beginning, though, these actors won their roles via a battle royale auditioning process (with the exception of Peter Dinklage, because he’s Peter Dinklage). Here, we take a look at some special YouTube artifacts from those auditions.

When Jason Momoa was first approached to audition for GoT, he wasn’t familiar with the source material; he just really wanted to work with HBO. That soon changed, however, when he locked himself away and devoured the source material like a Dothraki feasting on horse meat. As Momoa told AOL On, his audition was supposed to consist of Drogo simply saying “no” in an increasingly menacing manner. But Momoa wanted to explore a more intense Drogo, and, at the suggestion of actor/friend Michael Raymond-James, asked to perform a haka for the casting directors. The haka is a traditional war cry of the Maori people native to New Zealand, and Momoa evidently did it justice, as he was asked to return and perform it a second time. This footage comes from that second audition, and it speaks highly of his acting skills when you consider that no bath salts were ingested before the cameras started rolling.

Maisie Williams was coming off the major disappointment of narrowly missing out on a role in Nanny McPhee 2 when she was offered an audition for GoT, which perhaps proves the old adage that it’s always darkest before the sun rises. The footage seen here is her second audition, and Sophie Turner’s first. Williams told Winter is Coming that the two immediately hit it off, with Turner confirming that the two would high-five after each take. Williams was awarded the role of Arya soon after this audition, while Turner, who was reading with several other potential Sansas on this occasion, was awarded her respective role after D.B. Weiss and David Benioff were impressed with a later audition in which she looked at various severed heads. The two claim that the showrunners made very certain that their moms were aware of the content before moving forward.

Do not look away from the video, as many an unfortunate YouTuber has done, before the 59-second mark. In case of a heart condition, it’s advised to skip past that mark entirely, as it makes Momoa’s haka look like a soothing lullaby in comparison. According to an interview with Rolling Stone, this scene was later given to Littlefinger, to be delivered to Arya as a second-hand account, when the showrunners decided to roll out The Hound’s personality over the course of a few seasons. McCann was evidently not happy when Benioff pushed Weiss into his trailer to deliver the news to him. “Why are you pushing the wee guy in? You got something to say?” he asked Benioff. They explained their new approach to him, and they each deserve major credit for not immediately hopping on a flight to another continent. As an interesting side note, McCann beat out Kristian Nairn for a role in Hot Fuzz, many years prior to this audition, for a character that delivered one line of dialogue (“Yarp”). In a strange sort of cosmic justice, Nairn would eventually appear on GoT as a character whose only line was, “Hodor.”

Not everybody ends up with the role they originally auditioned for, as seen by this footage of Conan Stevens reading for the part of Drogo. Stevens ultimately ended up playing The Mountain, which was, in fact, his original desire. The part wasn’t being cast yet when he landed a chance to audition, and he decided to read for whatever he could to get a leg up on the competition. This explains why Stevens plays up his size so much while auditioning for Drogo; he was really aiming for the part of an eight-foot-tall knight. Stevens didn’t end up returning after the show’s first season, but remains a fan favorite. After all, as he explains on his blog, landing the role in the first place was largely due to fans reaching out to him.