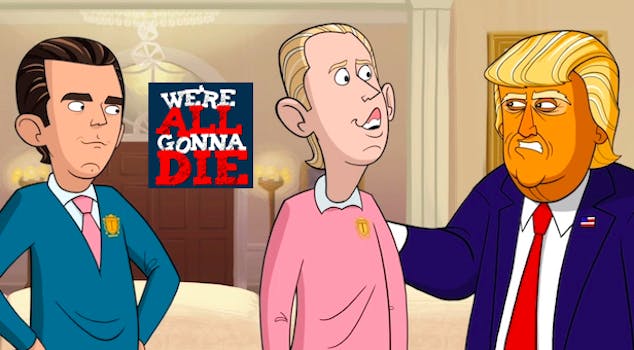 On this week's 'We're All Gonna Die' podcast, internet privacy with EPIC's senior counsel, 'Our Cartoon President,' and noise rock from Cherubs.

Gabe Gundacker is the voice of Donald Trump Jr. and Stephen Miller on Showtime’s Our Cartoon President. He joins this week’s episode of We’re All Gonna Die, a politics podcast from the Daily Dot, to discuss channeling these larger-than-life personas onto cable TV.

But first: You know that Brett Kavanaugh was accused of sexual assault during his confirmation hearing for the Supreme Court by multiple women. Did you also know that he’s decided multiple court cases in favor of government surveillance and communicated repeatedly with John Yoo, the so-called “architect of warrantless wiretapping?”

Alan Butler, senior counsel at the Electronic Privacy Information Center, joins the gang to unpack it all for you.

Lastly, we play you out with a little Cherubs, an internationally beloved noise-rock crew of grimy punk rock from Austin, Texas. The cult band is re-releasing 1996 compilation album Short of Popular this month via Sonic Surgery Records.