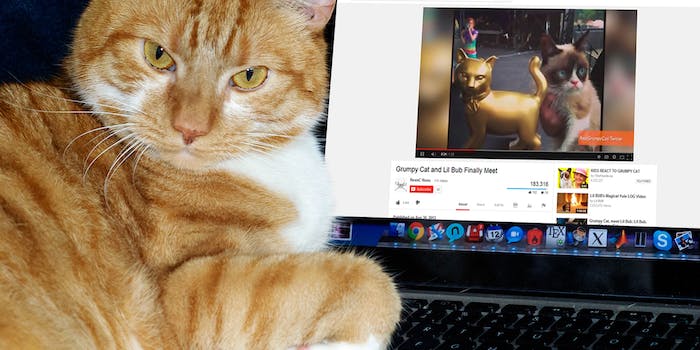 Is the Internet's obsession with cats a momentary fascination or do these felines have future staying power?

The day Grumpy Cat upstaged a panel of humans was one of the more telling cultural moments of South by Southwest.

On Saturday afternoon, a full house gathered in the Austin Convention Center for Cat Cash: The Economy of Internet Cat Videos, a discussion about monetization and virality. About three-quarters of the way through the panel, the humans on stage were silenced as feline superstar Grumpy Cat was brought in for “questions.”

The phones immediately came out, creating a dense forest of arms and flash that quickly obscured Grumpy and her owner. They had to slowly back out of the exhibit hall and into the Convention Center hallway to accommodate the growing crowd of starstruck fans attempting to snap selfies. Grumpy, by her nature, could have cared less. This is the tipping point of cat video fandom.

There was a similar scene at Sunday’s Cats Live Here event, hosted by Animal Planet. Fellow cat celebrity Lil Bub and her owner were tucked away in a corner of Cedar Street Courtyard, as fans waited in line for a photo. Her owner, Mike Bridavsky, petted her reassuringly as he did interviews, and she endured loud music and the enthusiastic voices of fans. She looked a bit terrified, and I felt a little bad for her. 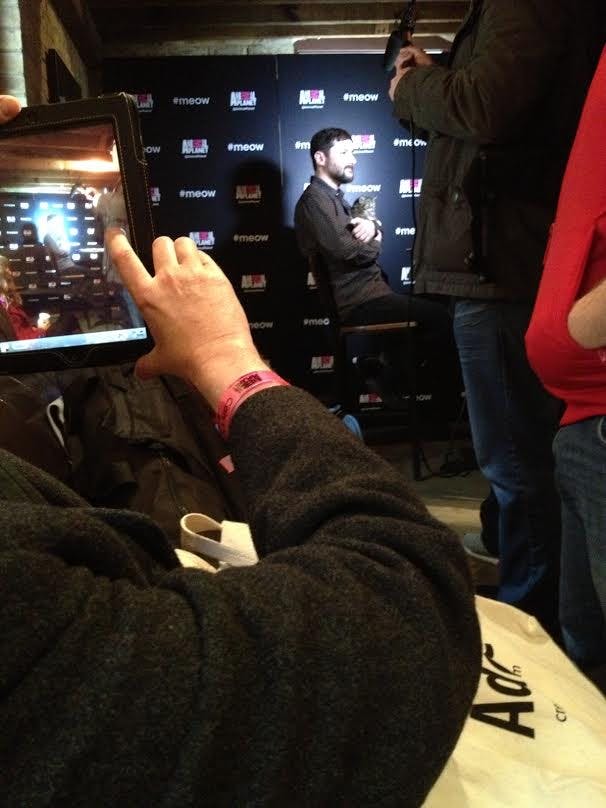 This extension of human emotion and empathy, however, is what has made cat video fandom such a popular Internet art form. Grumpy Cat and Lil Bub are a new breed of celebrity, and received top billing at SXSW alongside Edward Snowden, Julian Assange, and Lady Gaga. Much of the discussion about cat videos at SXSW hinged on their future, and how they can reach beyond YouTube or simple meme-dom. Animal Planet in particular is attempting to bridge the audience that tunes in for the Puppy Bowl and that of the cat video fan.

During Saturday’s panel, Grace Suriel, Animal Planet’s director of social media, claimed that only 24 percent of Puppy Bowl viewers had even heard of Lil Bub, whose Animal Planet special aired a week after the Super Bowl event. Over the next year, they’re going to continue to explore that space, and find new ways to introduce cats like Lil Bub to their audience, by partnering with channels like Animalist.


“I think cats are just so complicated,” Suriel says. “They have such different personalities [than dogs]. They can be snarky, they can be funny, they can be lazy. They’re adventurous. All the best cat videos are of cats—you know, they jump and they fail. They’re almost like humans, in that every single one is different.”

Is there a new cat celebrity we don’t know about yet?

“I don’t know,” she says. “I feel like maybe we should have a cat version of American Idol. It’s really essential for us to be fans. We’re always combing through videos. We’re all cat nerds and dog nerds. We have meetings and talk about the cat videos we love. That’s how we found out about the Internet Cat Video Festival.”

He said, somewhat tongue in cheek, that in the past two years of touring the fest, they’ve generated 2.5 billion media impressions, and made a net profit of $0. But he also points to the human connection that sustains this industry.

“I think it’s much easier to project some human characteristics to a cat,” he says. “I think dogs perform for the camera, and they want to please their owner. Cats are independent, and they could really give a shit at times. And that’s part of the appeal. There’s something about that that transcends multimedia. Cat videos aren’t new; the Keyboard Cat video was shot in the ‘80s, but it didn’t take off until 2008 when it was posted online. Social media as a vehicle for sharing is a big part of it.

“[Cats] are sort of this perfect combination of things: It’s cute, it has personality, highly shareable, and it’s an easy subject that everybody understands. A lot of the submissions for the festival come from Russia, Japan, Australia, Eastern European countries. Cat videos transcend language, in a really unique way. And it’s another example of how the Internet really is everywhere.”

Stulen says the festival got the initial attention because of its setting—the Walker Art Center in Minnesota — and the perceived lowbrow art of cat videos, paired with the highbrow culture of a museum. But that curatorial aspect remains when he’s looking for new videos.

“I would defend some videos as being an art form. I think they’re at least pop culture products worth consideration and discussion. And there’s that Warhol component as well. The interesting thing in all this is that cat videos have blurred the lines between who’s the artist, who’s the distributor, who’s the curator.

“Part of this discussion that’s sort of fascinating is, with Internet cat videos, you can shoot something, have millions of people see it, and no normal cultural institution or arbiter of taste had anything to do with it. It was put out there, and the public decided that we like this. That’s fairly new.”

Stulen is leaving the festival to take a new job, but admits the fest helped land him this new gig. While the cats are the medium, the human owners, curators, and “meme managers” like Ben Lashes are all part of this new cat economy, as is YouTube ad revenue and merchandising like mugs and books. Now, a publisher can look at Facebook and YouTube stats to find out a celebrity cat’s demographic, and how to market to it. Lashes paired with a “legit” toy company to make Nyan Cat toys. Grumpy Cat is now the unimpressed spokescat for Friskies’ new shrimp flavor.

However, it looks like a successor to the north has taken up Stulen’s torch. It was recently announced that Laureen Harper, wife of Canada’s prime minister, will be hosting a YouTube cat video festival at the Toronto International Film Festival in April, which will likely bring them to a whole new audience.

Stulen adds that, as cat videos get more popular, and there are more literal copycats attempting to emulate a formula for success, you can never force virality.

“I’ve seen countless Henri imitators, most of which are unfunny, and it’s because it’s missing that spontaneity, it’s missing that heart. Henri’s so great because he’s just a common housecat that Will [Braden, his owner] has developed a personality around, which is the opposite of Grumpy Cat or Lil Bub. They’re not doing anything, but they’re so unique. I think what’s interesting is seeing genres pop up within cat films.”

It remains to be seen if, as mentioned during the panel, a channel devoted to 24-hour cat videos appears in the future, but the economy is growing, and we’ll likely keep clicking and putting up our cameras, desperate to get a shot with the stars. It’s their stage, after all.

Photo via mseckington/Flickr (CC BY 2.0)/Remix by Jason Reed