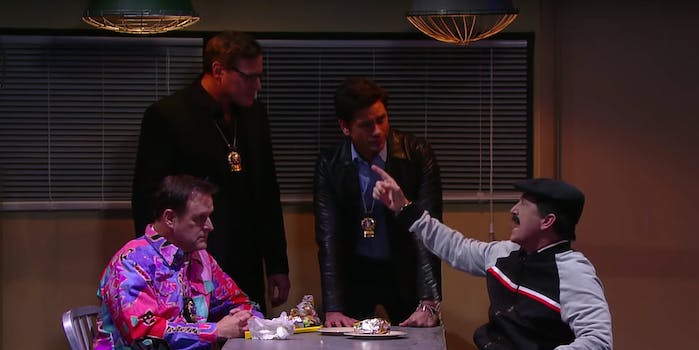 ‘Everybody has pain, and everybody wants to bury that pain under piles and piles of blow.’

If Fuller House can run entirely on the nostalgia factor, who’s to say that that big, happy family can’t work in other genres?

Bob Saget, Dave Coulier, and John Stamos seem to think it can. Teaming up with Stephen Colbert, they turned Full House into a gritty cop drama. Turning the “good cop, bad cop” trope on its head, Danny Tanner, Jesse Katsopolis, and Joey Gladstone are the good cop, bad cop, and impressionist cop as they gang up on Colbert’s drug dealer.

They keep the streets of San Francisco safe after the kids go to bed; still offer that comforting-lesson talk to criminals; and, if you’re nice enough, Danny will invite you home to help him raise his daughters—even if it’s as bad of an idea as it sounds. This trio’s got this routine down to an art form.