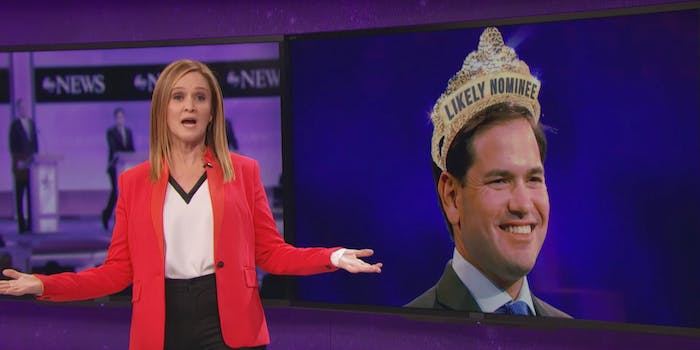 Is this the political comedy we've been missing?

In the cold open for Full Frontal with Samantha Bee, the new weekly late-night show from the former Daily Show correspondent, Bee confronts the one thing that’s dogged her for months: What’s it like being a woman in late-night?

With the premiere of her show Monday night simulcast across five networks, Bee joins an exclusive group primarily occupied by middle-aged white men. Chelsea Handler, the last female late-night host to have her own show, ended Chelsea Lately 18 months ago and has another one in the works with Netflix. Vanity Fair infamously left her out of a photoshoot featuring the “titans of late-night” back in September, and the publication later added insult to injury by adding Miss Piggy to the photo (a fictional character with a fake talk show on The Muppets who is voiced by a man) over Bee or Handler.

Bee embraced the controversy in the marketing leading up to the show’s debut. Her tagline (“Watch or you’re sexist”), talk of being the only female late-night host on TV, her diverse writing staff—things that seem like no-brainers to most people—dominated the conversation as much as what she wanted to do on Full Frontal.

“You know what it took?” Bee tells the fictional reporters in her opening scene. “Hard work, a great team, maybe just a little bit of magic.”

That “magic” turns out to be actual witchcraft—a crafty dismissal of the ridiculousness of the entire “woman in late-night” narrative.

Bee commandeers Full Frontal by abandoning the desk, a stalwart prop of late-night, and spends the entire show standing in front of a screen, which keeps the focus on her. In her first show, she’s largely triumphant as she mostly tackles the “banquet of all-you-can-eat crazy” that is the presidential election along with some sexism over in state politics.

“For months I’ve been just sitting here with no show, just yelling at a wall, while the most deranged electoral shitshow in a generation passed me by,” Bee says, “and it has been killing me.”

Whether it’s going after Bernie Sanders’s finger wagging in the latest Democratic debate, ripping into “sentient caps lock button Donald Trump,” or taking CNN to task for being rude to “Ted Cruz’s loving wife and possible hostage,” Bee goes head-first into a field that’s becoming more difficult to parody by the headline. She may have focused more on the Republican candidates than the Democratic ones this week, but she’s just getting started.

Political parody is an arena that most of the other late-night hosts, more prone to comedy than politics, have struggled with (Stephen Colbert being the clear exception), and Bee uses her expertise in this area to throw more jabs than ever. It works because she’s able to offer a fresh, new perspective, but she also never pulls punches, while others may have to play nice enough to get those coveted guest spots. It may not always hit—but when it does, it’s something to behold.

Bee will bring to Full Frontal the kind of pre-taped segments she excelled at on The Daily Show. Her first segment focuses on the purgatory of Jeb Bush’s campaign in the style of a Werner Herzog documentary, and she has future bits on women veterans and visiting a refugee camp in Jordan.

Bush’s campaign, according to Bee, is a dark and lonely place. What could be a one-note piece of comedy offers nuance and absurdity as the scene comes to a head when a Huffington Post reporter struggles to describe what he sees when he looks in Bush’s eyes.

Full Frontal’s first episode jumped right into the political fray, and it’ll be interesting to see in the coming weeks how she settles in. The weekly format will allow her to pick and choose which areas to focus on, like John Oliver’s Last Week Tonight. She doesn’t have to touch on everything, and not being weighed down by the 24-hour news cycle may help her hits stick even more when people are watching.

Bee was never approached to take over The Daily Show from Jon Stewart after working there for more than a decade, something that her husband and former Daily Show correspondent Jason Jones said “was a little shocking, to say the least.” But while Trevor Noah’s merits continue to be judged based on Stewart’s legacy, Bee can break the mold without those restrictions—even if her attempt in the first episode to quash the gender conversation fails.

On Full Frontal, Bee has perhaps more freedom than other hosts: She can do it on her own terms, one joke at a time.