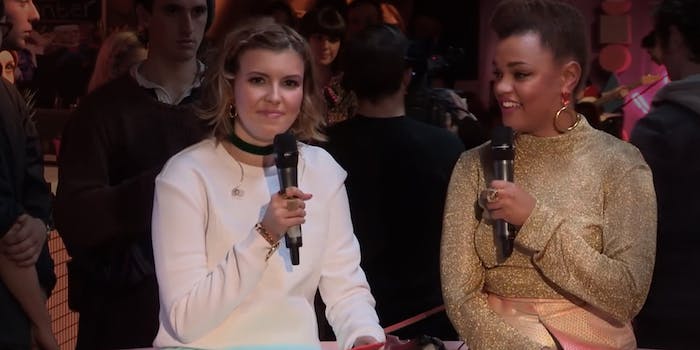 The problem with ‘The Fox Problem,’ a webseries about nothing

The Fox Problem purports to be an entertainment program, but there is so little of it here.

The Fox Problem harnesses the “magical power of Vines and InstaVideos mixed with Twitter, FaceyB and Instagram.” It was the first show that could be watched embedded in a tweet. Its initial series was Google+ Hangouts’ first live program. The current, second season is streamed live on YouTube.

As you might guess, this is the creation of a social media consultancy. You can imagine them sitting in meetings with middle-aged executives of would-be sponsors, bamboozling them with marketing gibberish and incalculable projections of “reach”, “tweets by key influencers” and “total impression span.” It is an approach that worked; The Fox Problem is “powered by HP.”

There is nothing wrong with any of this, of course. All shows run on money, not air, and the Internet is crying out for independently produced live broadcasts. But The Fox Problem is so concentrated around its social media presence and so beholden to contrived product placements that the presentation itself is a limp afterthought and almost unwatchable. It’s a shell, a delivery system of nothing.

It purports to be an entertainment program, but there is so little of it here; a performance by Nina Nesbitt is now missing from the catch-up stream, and the house band’s quality and Internet presence suggests that it’s related to someone involved.

In fact, it is all a bit of a love-in. One of the guests is introduced as a “set-designer and my friend,” and the show opens with an apology for the absence of one of the presenters as they are “smashing it in New York…taking Alexa Chung’s job.” Ignoring the fact that this seems to suggest that the HP products the presenters carry everywhere are incapable of cross-Atlantic communication, do you really want to highlight the fact there are better things going on elsewhere?

This raises the major issue with The Fox Problem. It is program that is transmitted from an area of East London synonymous with hipsterish types, and everything about it, from its style to its guests reflects this. But the HP sponsorship was no-doubt based on promises of the potential wide reach of this program, and the large scope of its social media assault is useless if the show itself is irrelevant to anyone outside of East London, let alone the U.K.

Are there many, for example, outside of the Facebook friends of the presenters who would appreciate the humor of Made in Chelsea’s Ollie Locke displaying pictures produced from an HP printer? How about an interview with some guy that runs a Twitter appreciation account for a Hackney pub? If you are puzzled by the relevance of these things, you will appreciate the problem.

To a point sloppy preparation and haphazard production can appear endearing rather than lazy in this type of program, but this isn’t Wayne and Garth. And it isn’t Aurora, Illinois. These are experienced, professional presenters in London backed by actual money and supposed thought. If they wonder why the bulk of their retweets are by their friends and HP, then they may begin to understand what is wrong with The Fox Problem.