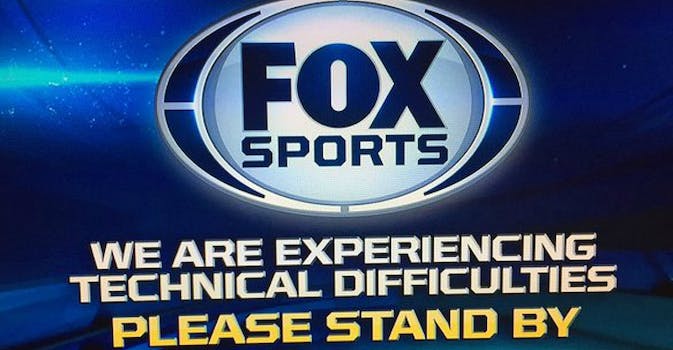 Fox loses broadcasting power during Game 1 of the World Series

Luckily, an MLB International feed was there to save the day.

What must have been the worst nightmare for Fox as the network broadcast the first game of the World Series actually occurred in the bottom of the fourth inning when the network lost power to its broadcast truck, knocking out the game for the U.S. audience.

And Major League Baseball had to delay the game until order could be restored.

For a few minutes, this is what Fox viewers who were watching the Mets battle the Royals saw when they looked at their screens.

Can you imagine the outcry if this happened during a Super Bowl? pic.twitter.com/E0oTShyHQG

Fox, after a few seconds, threw back to the studio where host Dan O’Toole stammered and vamped for a few minutes with analysts Dontrelle Willis and Eric Karros until Fox was saved by the MLB International Feed. When viewers were returned to the game, it was clear the game had been stopped, apparently because, as reports stated, there was an inability to review replays.

Both teams reportedly agreed to go without replays until power could be restored, and the game was restarted.

Of course, the entire nightmare led to all kinds of Twitter ridicule.

Fox, did you try unplugging it and plugging it back in? Clearing your cookies?

Luckily for Fox, the International feed was solid, leading to a couple of very important questions/observations.

Why is the MLB International broadcast in English?

In all, Fox lost power for 23 minutes, and considering Yahoo successfully broadcast an NFL game on the Internet last Sunday with hardly a blip, it wasn’t the network’s luckiest moment.

Jokes aside, I feel for the Fox Sports team right now. This is an epic disaster and I’m sure all hell is breaking loose in that truck.