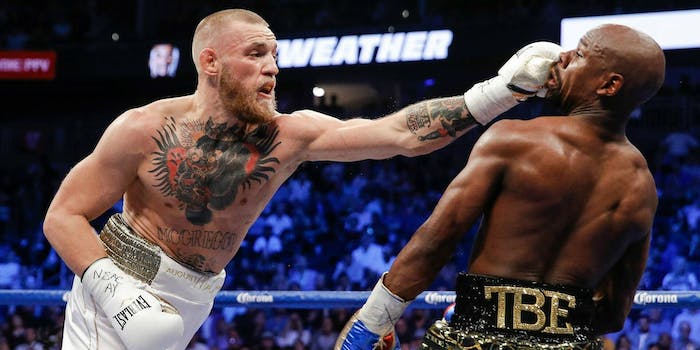 The Floyd Mayweather-Conor McGregor mega-fight Saturday night was expected to potentially break the all-time boxing pay-per-view record of 4.6 million buys. According to Irdeto, millions and millions bypassed the PPV model and watched on illegal livestreams for free.

According to Irdeto, a digital platform security company, 2.93 million people watched Mayweather knock out McGregor in the 10th round on media platforms that did not include having to pay $99.

Irdeto said it identified 239 illegal streams, and of those, 67 were shown by known pirate websites. But the other streams were discovered on social media sites like Facebook, YouTube, Periscope, and Twitch.

“It is safe to say that the Mayweather vs. McGregor match is one of the most pirated, if not the most pirated, boxing matches that we have seen,” Mark Mulready, the VP of Cybersecurity Services at Irdeto, told the Daily Dot in an email on Monday.

This particular fight was unique because it brought together stars from two sports with two distinct fanbases, and Mulready said the numbers indicate that pirates “capitalized on the eagnerness of both fans of boxing and UFC.” Plus, Showtime and the UFC both made the fights available on their own legal livestreams, which potentially could have contributed to people watching illegally.

“While content availability is key, it may have also inadvertently caused some consumers to choose an illegal service over a legitimate service due to confusion and clever marketing,” Irdeto said in its report. “Irdeto has seen an increase in pirates creating professional websites, technology and services, fooling some consumers into thinking they are accessing a legal service.”

But Irdeto also knows not everybody was getting fooled. In a recent study of 25,000 adults across 30 countries that the security company commissioned, it found that 52 percent of consumers knowingly watch pirated video content.

Pirated streams have become an enormous problem for boxing, particularly when it comes to its PPV shows. Showtime, which produced and distributed Saturday’s PPV, said before the show it would try to crack down on illegal streams.

The answer for how to stop the illegal streams (or even slow them down), though, is still unknown.

“We’ve established anti-piracy centers before to stop illegal streams,” Ringstar Sports CEO Richard Schaefer told the Los Angeles Times in May. “There has to be more proactive measures taken, including by the distributors—AT&T, Time Warner, DirecTV—to perhaps implement legal steps… Consumers have to know they can’t watch these pirated streams and then consider if they want to purchase the PPV.”

Some who bought it legally through one of the legal streams, though, also weren’t happy, particularly because the telecast didn’t work for everybody. Due to high demand, some fans had a difficult time logging into their UFC accounts or getting the stream to load on their browsers.

We r in panic mode / Waited all day for PAY PER VIEW OF FIGHT / not getting it & we can't get anyone on the phone ! pic.twitter.com/oTnandYpHU

The streaming problems caused the Mayweather-McGregor fight to be delayed slightly so the PPV provider could catch up with demand, but on Monday, at least one person took legal action.

The first class action lawsuit has been filed against Showtime over Mayweather-McGregor PPV issues.

Update 9:12am, Aug. 29: After initially declining to comment on Irdeto’s Mayweather-McGregor illegal stream findings, a Showtime spokesperson claimed post-publication that the company took a multipronged approach to combat piracy. “Mayweather vs. McGregor was an event of huge global appeal that attracted large scale efforts to illegally stream the telecast. During the fight, SHOWTIME and its partners successfully blocked and removed the highest number of unauthorized streams for any event in the company’s history. We did this through cooperative efforts with our distribution partners and social media platforms during the live event, as well as with proactive court action blocking third party websites that offered illegal live streams.”

Editor’s note: This article has been updated for clarity and context.