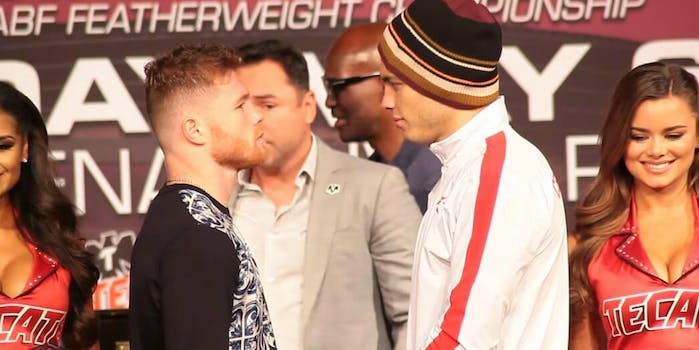 Boxing executives are getting bolder with plans to stop the piracy.

If you want to watch recognized middleweight champion Canelo Alvarez take on sturdy challenger Julio Cesar Chavez Jr. in one of the most anticipated boxing matches of the year, you’re probably going to have to shell out $70 for the pay-per-view broadcast. Or you can just find an illegal stream online and take it all in for free.

Unsurprisingly, Golden Boy Promotions, the company who’s running the event, is fighting back hard against those who would bypass the paywall and try to watch the grudge match between Alvarez and Chavez without having to pay any money for it.

“Along with HBO, who’s hired an anti-piracy company, we’ve invested additional money and hired a different company that concentrates solely on Facebook and Periscope,” Golden Boy President Eric Gomez told the Los Angeles Times. “We have all the precautions in place.”

It’s not just Facebook or Periscope that are problems for HBO—which is hosting the pay-per-view—and Golden Boy. There are plenty of ad-laden websites that stream the broadcasts from HBO, Sky Sports in the U.K., or other networks from around the world.

Golden Boy would prefer you stream it directly from its website or buy it from HBO, which declined comment to the Daily Dot on its anti-piracy efforts.

“The anti-piracy companies have already sent Facebook and Periscope letters to let them know. … We’ve given them time to be on it and I believe we’ll be more successful,” Gomez said. “You can’t stop everything, but we feel comfortable we’ll stop most of them.”

The boxing PPV industry has not been robust in the past few years, and it’s unclear how much illegal streaming has played a role in that. The Floyd Mayweather-Manny Pacquiao fight from 2015 scored a record 4.6 million PPV buys, but in his last three PPV appearances, Alvarez, as the headliner, has failed to crack the 1 million barrier. In his last bout vs. the virtually unknown Liam Smith, he only garnered about 300,000 buys.

The matchup against Chavez likely will do better than that—these two are big rivals, and both are from Mexico, so they’re fighting for the hearts of their countrymen. But inevitably, many will forgo having to pay $70 and watch it in some other way.

As they apparently did last week for the Anthony Joshua-Wladimir Klitschko heavyweight battle when, according to the Times of London, 400,000 U.K. boxing fans decided not to pay the £20 PPV cost and instead watched it on Facebook Live. And then there was this Australian man who got in trouble with his cable company for streaming a fight to 150,000 viewers.

“The question is what’s the answer?” Ringstar Sports CEO Richard Schaefer told the Los Angeles Times. “We’ve established anti-piracy centers before to stop illegal streams. … There has to be more proactive measures taken, including by the distributors—AT&T, Time Warner, DirecTV—to perhaps implement legal steps. … Consumers have to know they can’t watch these pirated streams and then consider if they want to purchase the PPV.”