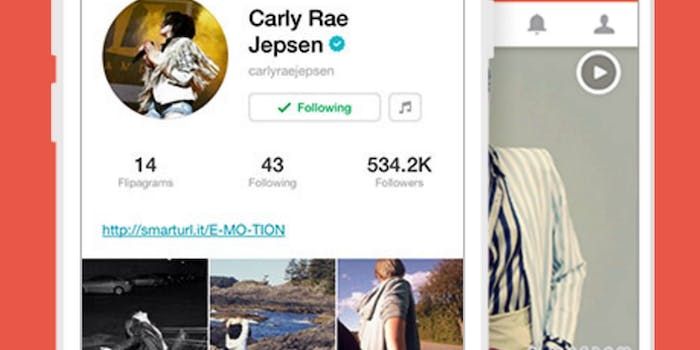 The app attracts billions of views per day.

Flipagram, an app that combines video with 60 seconds of music, has apparently attracted a lot of people with something to say. On Thursday at VidCon, it was announced that the app now has more than 200 million creators on the platform and that half a billion stories have been created. The number 4 billion was also thrown out: That’s the estimated number of views taking place on the app daily.

CEO and co-founder Farhad Mohit said the goal of the app, which has been around since 2013, has always been “the democratization of video storytelling.”

“The mobile phone is a democratizing force,” he told the Daily Dot. “There’s 5 billion of them out there, and Flipagram makes it incredibly easy for anyone with a mobile phone or smartphone to create a narrative with photos and video. …You can tell almost any type of story, as some of the best Super Bowl ads have shown, in one minute. Setting it to music wins for the musicians as well.”

It’s also a democratizing force for musicians. He said roughly 80 percent of the top 50 active accounts on the app are emerging musicians, like the group Pink Furs. The sisters—aged 13, 14, and 15—have more than 12,000 followers and said they prefer the platform over other teen-leaning apps.

Here’s an example why.

Mohit said there’s a domino effect: When a musician becomes “Flipagram-famous,” other users start making videos with their songs, which means more exposure for the original artist and the fan.

Flipagram also procured a massive library of songs that can be used on the app, and it has deals with major labels like Sony and Universal. But it’s not necessarily a two-way street; the app isn’t trying to be a talent agency or get creators signed.

The platform also rolled out Flipagram Channels—which will spotlight notable creators, including dancers and stop-motion artists. Comedian Steph Barkley has been on the app for roughly eight months and already has more than 390,000 followers. She uses the space to try out characters, and it’s opened up her audience and given her more freedom than Vine’s six-second confines.

There’s also a permanence to Flipagram that might be more appealing than a competitor like Snapchat. This was apparent when Prince died in late April, and Flipagram became a stream of tributes.

Mohit said that music and video is a global language, something that conveys emotion without the written word. Said Mohit: “Our mission is to get to all 5 billion of those people and have them tell stories.”