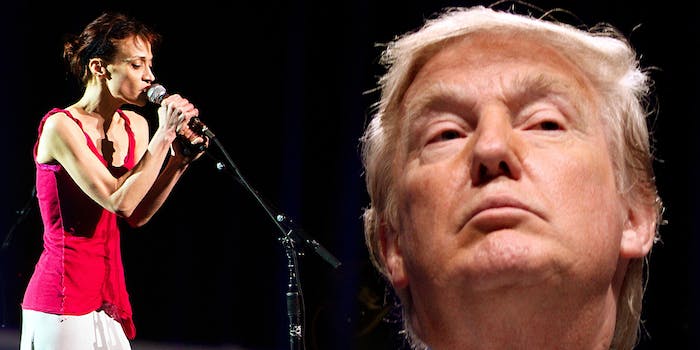 On Sunday night, singer Fiona Apple took the Standing With Standing Rock benefit stage to bring in some holiday cheer with her political version of Nat King Cole’s “The Christmas Song,” roasting President-elect Donald Trump to new levels of heat.

The enchanting holiday remix, titled “Trump’s Nuts Roasting on an Open Fire,” features lines like: “Trump’s nuts roasting on an open fire / As he keeps nipping at his foes / You’ll cry ‘creepy uncle’ every time he arrives / For he keeps clawing at your clothes / Everybody knows some money and entitlement / Can help to make the season white.” She ends the ballad with a sincere “Merry Christmas, Donald Trump… fuck you!” before leaving the stage.

The Standing With Standing Rock benefit took place in Los Angeles’ Fonda Theatre in support of the Sioux Tribe, and in protest of the Dakota Access Pipeline construction.

Alongside Apple were artists like TV On the Radio, Sky Ferreira, Benjamin Booker, and Kimya Dawson.

You can watch Apple diss Trump below.