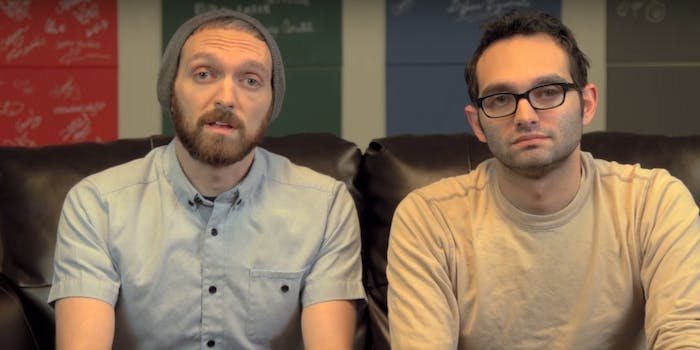 The Fine Bros. address the ‘confusion’ and backlash around React World

The channel has been losing a lot of subscribers.

The Fine Bros., creators of a hugely popular YouTube franchise including the “Teens React” and “Elders React” series, are facing widespread backlash after announcing their new project, React World.

React World expands the Fine Bros. brand worldwide, allowing other businesses and creators to post their own videos using the Fine Bros. format. The key word here is “allowing,” because the Fine Bros. are attempting to trademark various video templates including Kids React, Lyric Breakdown, and Opinions.

Fans and YouTubers were immediately concerned that the Fine Bros. would use their new trademarks to quash anyone using similar formats. And since reaction videos are a longstanding YouTube subgenre, many people felt that the Fine Bros. were trying to control and monetize something that didn’t belong to them in the first place. Backlash poured in on Reddit and social media, and other YouTubers posted their own reactions and parodies of the enthusiastically corporate React World announcement video.

The Fine Bros. responded Friday on Facebook, saying, “We do not own the idea or copyright for reaction videos overall, nor did we ever say we did.” They assured their followers that React World would be “a voluntary program for people wanting direct support from us,” explaining that they were only trademarking the specific format of their own React video series. Unfortunately for them, this failed to make a dent in the ongoing criticism from fans and YouTubers.

All of the top comments on Friday’s Facebook post are harshly negative, accusing the Fine Bros. of exploiting the YouTube community. Former fans are unsubscribing from the Fine Brothers Entertainment channel in droves, and entertainment lawyer Ryan Morrison announced that he would oppose the trademark application.

If you make YouTube videos or stream, I will be offering pro bono services to oppose the REACT trademark by Fine Bros. Please DM me.

Morrison, a well-known figure under his Reddit handle VideoGameAttorney, posted a video calling for content creators to help him prove that that “React” is a generic concept, and therefore shouldn’t be trademarked. Writing on his law firm’s website, Morrison compared the situation to Sony’s failed attempt to trademark “Let’s Play,” accusing the Fine Bros. of misrepresenting their plans for their React World trademarks.

“I’ve seen a lot of people arguing that this is just them protecting their brand, and that they would never go around bullying people. We’ve seen that’s blatantly false as they have issued a plethora of C&D’s (if the reddit users claiming to have received ones are to be believed, which I think they are), and have even sent their fans to brigade programs like “Ellen” for doing a similar reaction bit. I watched Kids Say the Darndest Things. These guys didn’t come up with the idea of filming funny reactions from kids. And they certainly don’t own an entire genre of YouTube videos. It wasn’t their idea, and it’s not theirs to own or police.”

As Morrison mentions, the Fine Bros. did publicly object to The Ellen DeGeneres Show filming a “kids react” video in 2014, calling out the show on Twitter. However, the actual TV segment bears little resemblance to the Fine Bros. brand.

Getting Tweets that @TheEllenShow are having kids react to old technology like typewriters. just like our show. Hoping it's not the case.

If it is, a shame to not have @thellenshow reach out to us vs. just fully taking it as their own. This happens too often.

On Sunday, the Fine Bros. posted a video update on the “confusion and negative response” to React World. The brothers reiterated what they already said on social media: They’re not trying to trademark the entire reaction video genre, because their trademarks are only meant to cover the specific format they use for the Fine Bros. series. They also invited people to email them personally to discuss any concerns about React World.

Once again, this unapologetic response backfired. The Fine Bros. channel is still hemorrhaging subscribers, and the YouTube community still hasn’t warmed to the idea of React World. On Reddit, people are beginning to dredge up examples of the Fine Bros. allegedly shutting down videos that shared similarities with their brand. One such video, titled “Seniors React,” was posted before the Fine Bros.’ first Elders React video in 2012, but has since been removed from YouTube.

Meanwhile on Twitter, Ryan Morrison remains unimpressed. He plans to go ahead with opposing the Fine Bros. trademarks.

When you own a trademark, you HAVE to enforce it. They also say their format of videos? They didn't come up with their format.

"We do not own the react genre." Thanks @thefinebros, making my opposition filing a lot easier!