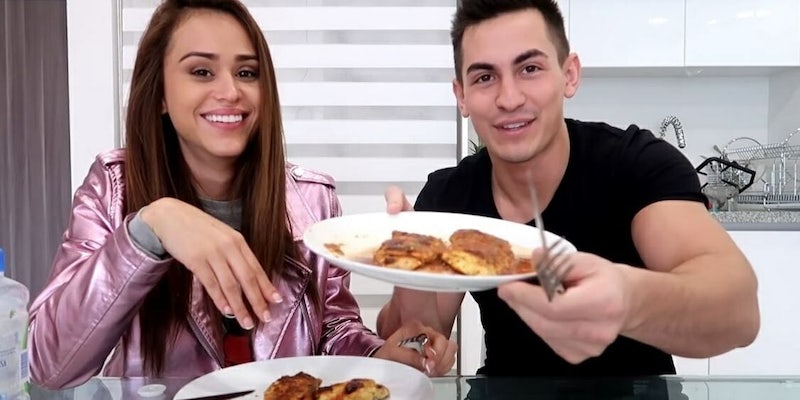 Much of YouTube gamer FaZe Censor’s channel has been filled with videos of Yanet Garcia, his longtime girlfriend who has 7.7 million Instagram followers and who has been called the “world’s hottest weather girl.” He has created videos showing Garcia making him Mexican food for the first time, teaching her how to play Fortnite, and featuring her reaction to him shaving her dog.

But after breaking up with Garcia, apparently to focus on gaming, FaZe Censor faced a backlash, mostly from people who were incredulous about his decision to dump her for his Call of Duty career—which he then retired from shortly thereafter. In a vlog posted Tuesday, FaZe Censor, whose real name is Doug Martin, explained what happened, saying she wanted a percentage of his YouTube earnings and that she tried to control the people with whom he spent time.

“I see all over social media that I took a big L, that I dumped the hottest girl in the world,” Martin said. “… At first, I thought I’ll roll with the memes. Now, it’s to a point where people generally think this is how it went down.”

Garcia decided during the summer that he wanted to focus more on his gaming career and on becoming a professional Call of Duty player, and he made a video in July explaining that this was part of the reason he and Garcia had split after a three-year relationship. Martin also talked about how Garcia moved from the U.S. back to Mexico City so she could focus on her TV hosting and modeling opportunities.

Three months later, he announced that he was retiring from Call of Duty to focus on creating more content for his YouTube channel that has 2.5 million subscribers. Martin said he knows the optics of how his relationship ended look silly now. So, he tried to explain in this video.

It hasn’t stopped him from getting roasted on social media.

What year FaZe Censor is having!

Breaks up with Yanet to, and I quote “win”… champs and then decides to retires after 3 days of the game being live.

Wrote one YouTube commenter, “Sir you just won the ‘L’ Award for the year,” and another responded by writing, “Censor won the Nobel L prize.”

Martin, though, said much of the problem was financial.

“Everything started to turn when I mentioned to her how much money could be made on YouTube [earlier in their relationship],” he said. “At this time, YouTube wasn’t really that mainstream. Nobody really respected YouTube as a profession as they do now. So, when she understood how much money I was making on YouTube, she wanted to get a percentage of the videos I was making.”

Martin said he understood the reaction, especially if her appearing in his videos (along with the requisite headlines and thumbnails that featured her name and face) was helping drive viewers to his channel. But he also said giving her money was morally inappropriate and that he paid for her bills and financially supported her. He also said, “she would give me ultimatums about who my friends could be and who they can’t be…. There were issues I didn’t like.”

To illustrate his point, he told about the time he offered to buy her car but that she refused to let him film it. In Martin’s head, there had to be a balance between creating content and getting paid for it and giving her a generous gift.

“She said, ‘Is that was this is all about? Is this all about making a video to make money?’” Martin said. “I see where she comes from in her head. But it causes friction, and it continues to grow over time. It becomes unbearable over time.”

Presumably in response to his video, Garcia tweeted a photo of Barack and Michelle Obama and wrote, “A woman’s loyalty is proven when her man has nothing. A man’s loyalty is put to the test when he has everything.”

Ultimately, Martin said he “felt really embarrassed and ashamed to break up with this sexy, hot girl, because I was afraid of getting flamed and roasted on social media. I didn’t help myself by saying it was for Call of Duty.”

Unfortunately for Martin, that career is now as dead as his former relationship.