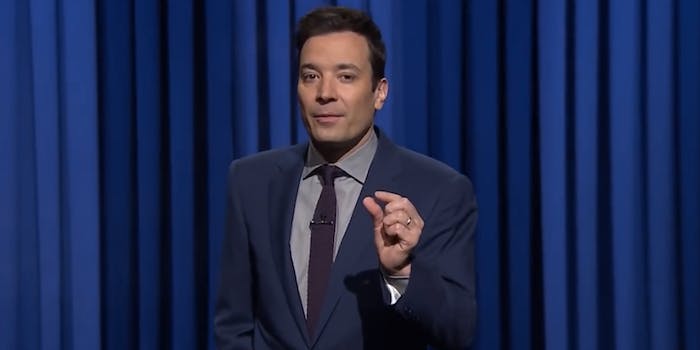 There’s a new king of late night, but he’s wearing the crown digitally.

The Tonight Show With Jimmy Fallon has surpassed Jimmy Kimmel Live on the shows’ current battleground: YouTube.  Fallon’s subscribers hit 4.7 million to Kimmel’s 4.6 million this week. Their next nearest competitor is Conan, with 2 million.

While Fallon and Kimmel both started their channels around the same time in 2006 for their respective shows, Fallon only this year made the leap to the 11:35pm timeslot, while Kimmel has held it since 2012. Since his ascension to The Tonight Show desk, Fallon has made massive progress against Kimmel’s numbers, gaining on average 11,224 new subscribers a day to Kimmel’s 3,605, according to Tubefilter. Fallon’s also won professional accolades this year for his digital work, with his team winning the Creative Arts Emmy for Creative Achievement in Interactive Media, as well as a Streamy for Best Television Show.

Perhaps most interesting, however, is if we stopped looking at late night hosts and broadened the picture to any talk show host, we’d actually have a Queen. Ellen deGeneres boasts 9.9 million subscribers to her channel, which launched at the same time as Fallon’s and Kimmel’s. With more attention moving to time-shifting and digital consumption, the lure of late night might not matter so much in building your entertainment empire anymore.